Editor’s note:  The bombing attacks on Russian and Syrian troops fighting ISIS, the US led attack on the Russian embassy in Damascus and the dramatic, and “dramatic” is the word, increase in phony poison gas stories is problematic.

Trump has been ordered by his handlers, who want to save their investment in the first fully mob owned US president, to start a broad war that will likely go nuclear and “ashify” 100 American cities.  This is exactly the risk they are taking.  Russia’s nukes are new, attached to better missiles than we have and we are going to force them to kill us all…Gordon

[ Editor’s Note Two: This is fake news on steroids. Chlorine gas can be made by a smart high school kids, and all college kids studying chemistry. It is just a process of mixes the right chemicals.

The New York Times has people smart enough to know this, but they used and old media trick, citing an "official” UN report, which we don’t even know for sure is real itself. This is the same UN that cannot discover Israeli nuclear, chemical or biological weapons industry, and neither an the NY Times. Imagine that.

The good news is that when they are scraping the bottom for fake news stories like this to bang Syria over the head for having survived the US coalition-ISIS attack on Syria, they don’t have anything real to use.

They love to knit bad guys together for guilt by association, but don’t love doing it when Israel and the US are supporting terrorist proxies against the Syrian people, a war crime. One might say, as I would, the the NY Times is aiding and abetting in support of terrorism when they like the targeted victim.

And of course we never see it pose a motive for Assad to use chemical weapons when there is absolutely no need to, and where it would hand a propaganda victory to the US on a silver platter. No independent observer believes he would do that … Jim W. Dean]

What could be better to beat the drum for regime change than tying North Korean missiles to Syria and chemical weapons? Apparently, the New York Times did just that when it wrote about a leaked UN report.

The article, run by the respectable US newspaper on Tuesday, is based on a 200-page report by a group of eight experts who were tasked by the UN Security Council to monitor how sanctions against North Korea are implemented.

The country was punished for developing nuclear weapons and rocket technology with serious restrictions on how it can trade with foreign nations and has been finding ways to circumvent those.

The NYT focused on two particular episodes mentioned in the report. One was the interception in January 2017 of two ships carrying acid-resistant tiles from North Korea to Syria, with three other such contracted shipments revealed via paper tracking, although whether or not they were actually made remains unclear. The UN experts said such tiles are “commonly used in the construction of chemical weapons factories.”

Just how badly do they want a war? “United Nations security council diplomat” is almost certainly a Nikki Haley advisor. And “medical aid organizations” is SAMS, the pro-regime change group funded by USAID and active only in insurgent held areas. https://t.co/aE9CnODRFKpic.twitter.com/Wk1KneZrR6

Another episode happened in August 2016, when a delegation of “North Korean missile technicians” visited Syria and brought with them “special resistance valves and thermometers known for use in chemical weapons,” according to the report. Both episodes were reported to the UN panel by unidentified UN personnel.

Experts who reviewed the report on behalf of the newspaper said the evidence presented by the UN “did not prove definitively that there was current, continuing collaboration between North Korea and Syria on chemical weapons.” The NYT did not say how or when it obtained the UN document, which is not available to the public. 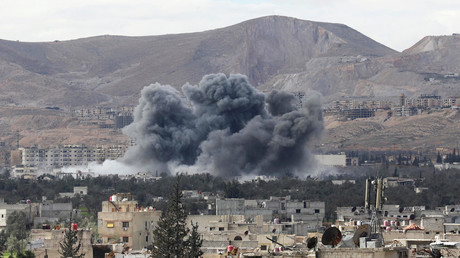 The publication of the report comes as the Syrian government stands accused of repeatedly using chemical weapons against civilian targets in eastern Ghouta, a neighborhood of Damascus controlled by several jihadist groups.

The alleged attacks with chlorine gas – which make little sense from the military point of view – are reported by local sources with ties to the militants. They cannot be verified by independent observers, including those from the countries openly calling for the toppling of the Syrian President Bashar Assad, like the US.