In recent days, the NATO leaders, from Brussels, have deceived the Ukrainian people in the worst way. To convince poor patriotic young people with the fatuous ideal of freedom, the last remaining lie in the triple cry to the equality and fraternity of the French Revolution planned by the Freemasons of the New World Order in its first diabolical action, they continue to repeat the false mantra that Ukraine he can win the war against Russia despite an incomparable military endowment.

They do so by abusing the good heart of Russian President Vladimir Putin who, in order not to carry out massacres on the population “American Style” as in Hiroshima, used hypersonic conventional missiles with a dropper. The Tsar of Moscow preferred to count thousands of victims among his soldiers rather than reaping massacres in the crowd.

Despite this, the politicized Western mainstream of Satan’s journalists invented every day greedy propaganda such as Bucha which readers made ignorant by space-balls on the SARS-2 of the pandemic (created in the laboratory and artfully spread to impose an NWO social dictatorship) have believed. as if it were the Gospel they haven’t read for decades.

This could trigger a dangerous spiral in the war that the Kiev regime, not surprisingly supported by the Nazis of the Azov Battalion and the ISIS jihadists of the Sheick Mansur Battalion, wants to continue indefinitely by refusing any compromise for immediate peace.

An immediate peace is in fact contrary to the interests of Jens Stoltenberg who in September will leave his position as Secretary of NATo to become president of the Bank of Norway, one of the largest government investors in the international corporations of the Weapons Lobby.

In recent days, the Russian army has been accused, without the slightest proof, of having used those phosphorus bombs (banned by countries around the world but not by the US which recently bought them from an Israeli multinational) used really repeatedly by Turkey in the ‘Peace Spring military operation in Syria under the smug gaze of NATO and the distracted gaze of ignorant Western readers who are now crying out for revenge against Russia, intervening to end the war in the tormented pro-Russian Donbass triggered by the 2014 coup devised in Kiev by George Soros and by the countries of the Atlantic Alliance.

These accusations could really legitimize Putin’s use of nuclear weapons, now accused for no reason of being the worst war monster of the Third Millennium while his former rival Barack Obama, puppeteer of American President Joseph Biden, took the Nobel Prize for Peace despite having invented the holocausts of the Arab Springs.

But fortunately Divine Providence seems to have opened a glimmer of light in this gloomy horizon. For a just nemesis, the US intervened in Ukraine to steal Donbass gas (thanks also to the role of the energy company Burisma in which Hunter Biden, son of Joseph, who armed the anti-Russian revolution, was director) and eager to bring the Russian economy to its knees in continuous expansion despite the sanctions applied since 2014 for the annexation of Crimea (with a plebiscite to 96% of the population) are losing the energy war in Europe.

The signal is twofold. On the one hand, the European Union has failed to reach an agreement for the embargo on Russian oil, essential for the Old Continent at a time when the Arab OPEC countries do not want to listen to the calls of Brussels to marginalize Moscow.

On the other hand, financial analysts of energy resources announce that in the coming winter, due to the continuous reductions in Russian gas flows decided by Ukraine itself with a suicide maneuver (in fact, it earns on the transit of every cubic meter that Gazprom passes through the gas pipelines of its country) and from the ever-tightening sanctions, the price of blue gold could even triple.

PUTIN CELEBRATES THE VICTORY. “War in Ukraine against Nazis and NATO Plans”. Nuclear Nightmare for NWO

It will be interesting and curious to see how Europeans and Italians react in the autumn to the gas rationing justified by the Russian war together with the resurgence of a laboratory pandemic functional to the administration of the 10 doses for each EU citizen already purchased by the European Commission from the Big Pharma sponsored by the Biden administration backed by Pfizer-funded Democratic Party during presidential campaign against Donald Trump.

While in Italy even the statistics announce the very serious crisis already anticipated on February 3, 2022 together with the war in Ukraine by Sergio Mattarella, President of the Italian Republic in the hidden role of ambassador of the New World Order, and the inevitable surge in unemployment is announced as a winter of tears and blood, in the cold!

It could be the time that really the Italians in the first place but also the Germans, the French and the other Europeans decide to go to the golden palaces to take Mattarella, Ursula von der Leyen, Mario Draghi, Emanuelle Macron and the other shameless statesmen who to obey the The plans of Biden and the New World Order are leading the cradle of world civilization to suicide by proving far worse than the Huns and Vandals who raped Europe in the Middle Ages.

At least the Barbarians had a heart that allowed them to convert to that Christianity of love against which the Masonic Deep State has instead declared war since the French and Bolshevik Revolution and the Expedition of the Thousand in Sicily.

European Union member states have failed to agree on proposals to ban Russian oil imports, after more than 10 days of talks, with Hungary leading a group of countries resisting the measure, according to the EU foreign policy chief.

Josep Borrell said: “we will do our best in order to deblock the situation. I cannot ensure that it is going to happen because positions are quite strong.”

The proposed embargo on Russian crude is part of a sixth package of sanctions, proposed on May 4, over the Ukraine conflict.

Borrell acknowledged that some member states“face more difficulties because they are more dependent, because they are landlocked,” and that “they only have oil through pipelines, and coming from Russia.”

EU countries which are highly dependent on Russian oil, including Hungary, the Czech Republic, Slovakia and Bulgaria, have repeatedly voiced their objections to a ban. The Hungarian government says an embargo would deal a crippling blow to the economy.

Last week, Hungarian Foreign Minister Peter Szijjarto said that the bloc had failed to find a way of mitigating the damage from an embargo.

Since late February Western powers have imposed severe sanctions on Russia over its military operation in Ukraine. The penalties include banning coal imports, freezing Russian assets, closing the skies to Russian planes, blacklisting businesses and other measures.

“Gas to Europe with Payment in Rubles only”. Putin’s Checkmate to the NWO: Either gives way or the Third World War begins

Aside from banning EU planes from its airspace, Russia’s response has so far been largely limited to sanctions against certain companies related to the seizure of Russian assets, and a demand that “unfriendly countries” pay for Russian natural gas in rubles.

A “perfect winter storm” may be forming in Europe, as the continent seeks to limit Russian gas flows, analysts at Rystad Energy said in a press release this week. They added there might be not enough LNG to replace Russian gas during the freezing weather. The price of gas in the EU was projected to soar to $3,500 per 1,000 cubic meters.

According to the report, last year Russia sent 155 billion cubic meters (bcm) of gas to the continent, providing more than 31% of its gas supply.

“Replacing a significant portion of this will be exceedingly difficult, with far-reaching consequences for Europe’s population, economy, and for the role of gas in the region’s energy transition.”

By shunning Russian gas, Europe has destabilized the entire global LNG (Liquefied Natural Gas) market, which began the year with a precarious balance after a tumultuous 2021, Rystad explained. The decision to sharply reduce reliance on Russian gas and LNG from current levels of between 30-40% will transform the global LNG market, it added. 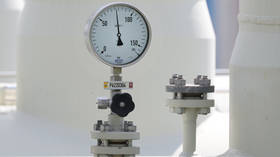 The report highlighted that global LNG demand is expected to hit 436 million tons in 2022, outpacing the available supply of just 410 million tons. “The supply imbalance and high prices will set the scene for the most bullish environment for LNG projects in more than a decade, although supply from these projects will only arrive and provide relief from after 2024,” it said.

According to the research, if Russian gas flows were to stop tomorrow, the gas currently in storage (about 35% full) would likely “run out before the end of the year, leaving Europe exposed to a brutal winter.” Under such a scenario, in the absence of joint buying arrangements and countries competing for limited molecules, the TTF gas price could climb to more than $100 per million British thermal units (MMBtu), resulting in industrial curtailments and widespread fuel switching in the power sector. In an…