Eurovision: A False-flag Operation or Something More? – Veterans Today | News

NEWYou can now listen to Fox News articles! A bloody fight continues over the city of Lysychansk in...
Read more

By Jeffrey D. Sachs The war in Ukraine is the culmination of a 30-year project of the American neoconservative movement....
Read more

Estimates that 200 million people watched the song contest “Eurovision – 2018” in Lisbon help explain why the event was ripe for harvesting hearts of unsuspecting pop music fans across Europe. For Americans unfamiliar with the annual event, Eurovision is a product of the European media industry – part reality show, part amateur hour, and in recent years, a showcase for liberal fringe values foisted on young TV consumers.

This year it not surprisingly clearly reflected the state of affairs on the world stage. The victory of Netta Barzilai, an ex-IDF solider participant from Israel, has become not only convincing proof of what this event really is in the world of culture, but also a feast for meditation of experts in international relations. As the Spanish newspaper ABC predicted, the competition became a “mirror of world geopolitics at the highest level.”

It is noteworthy that a number of universities and academies involved in the preparation of future diplomats have already begun teaching subjects related to Eurovision. At the same time, the idea “responds to the need to understand and analyze what is happening at this event, which has already reached global significance,” writes ABC.

Experts argue that in the prism of the competition it is possible to study European integration and expansion, as well as to anticipate future geopolitical conflicts or alliances, so is the opinion of Professor Antonio Obregon of the Comillas Pontifical University.

It is felt that before the competition there was a lot of preparatory work not only among the media, but also in the university circles of Europe, and even Australia, in preparing ground for the shocking phenomenon of Netta Barzilai.

And if ordinary pop music lovers were shocked by the obvious drop in the standards of the contest, and some simply decided that corruption had also taken its roots here, then the mirror of geopolitics gives food for other reflections.

By winning the 2018 event, Netta Barzilai will host the next Eurovision Song Contest in Israel.  Before your jaw hits the floor at the absurdity of this possibility, ask yourself how Israel was even considered European in the first place. Then, wonder with me how an enlightened Europe will send its singers to the country that conducted open mass slaughter of unarmed people in the concentration camp known as Gaza, a place from which those imprisoned have been begging for release for 11 years now?

What will become of traditional European values ​​of humanism, equality and freedom after the events of May 15, 2018, if they still send delegations to Israel in 2019? Has Europe been reduced to vassalage unable to push back? Or is the takeover of once proud countries complete leaving no one to care?

Why did Israel allow itself to arrange another false flag operation, this time in the form of a gift to art lovers, on the day of the 70th anniversary of the creation of Israel? How could the victory of Netta Barzilai, the anniversary of Israel, the transfer of the US embassy to Jerusalem and thus the recognition of Jerusalem (one of the oldest city on Earth, the symbol of peaceful coexistence of peoples and religions) as the capital of apartheid, and the bloody rivers in Gaza coincide?

To hear the Western main stream media wax poetic on the triumph of Israel’s birthday, the brave and bold move by President Trump to move the American Embassy to Jerusalem, and the wonderful victory by an ex-IDF soldier in a big talent show, Zionism is on a winning streak.  Throw in a successful visit to Moscow, some attacks in Syria, and maybe even a victory at Pimlico at the Preakness!

All the while those “evil Hamas terrorists” rained on the celebrations by moving people to a so-called border forcing Israel to defend itself. Such hubris marks a new low in the sad state of journalism in western media. Nowhere are US official voices heard condemning the outrageous crimes against unarmed civilians. Even remaining silent was not enough as the inert UN ambassador blocked Security Council moves to investigate the massacre.

Was the Israeli run of luck entirely man-made? A carefully planned hijack of media events? Or, did the stars coincide to favor Israel with such outstanding success?

To consider the situation from another perspective I found the following observations from the Russian astrologist Timur Sviridov (Zvezdochet-Pro). A lot of symbols and many meanings!

Here is Timur’s analysis of what may be happening:

So, Uranus is already approaching Taurus and crazy things begin. I just watched the song-winner of Eurovision and the skullcap on my head stirred. But is it really only I that noticed it?

We see, as it were, the playful song of a fat woman, who tirelessly twitches on the stage and at times does not fall into tonality. BUT! This crook is dressed … in the colors of Moses’ cape! 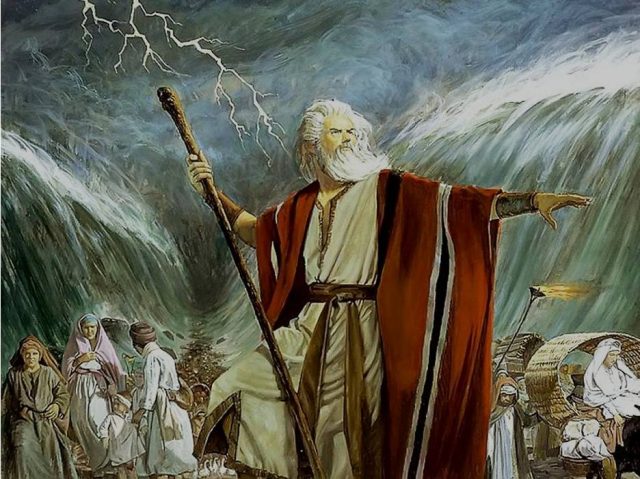 And pseudo-Japanese sleeves only emphasize the similarity! Traditional clothes are not used in jokes.

Prophetic garments – this alone makes you wary and look for inner meaning in the song. And the search is immediately rewarded! You just read the text (I changed the location of stanzas, which is not fatal with such information):

I’m not your toy,

I’m not a puppet, but an amazing creation,

I do not care what kind of modern preacher you have there,

I am divine, and you will soon regret,

You’re dumb as your smartphone,

I do not care about your Stefa, darling,

I’ll take you down to the ground now and make you look at me,

I’m not your toy,

I’ll play with my puppets at a furious pace …

And to whom is this text addressed?

Regularly this patter is interrupted by the refrain “Trrump!”

And if there are any doubts, then Stefa is Stephanie Clifford, Trump’s past passion and current problem.

It’s impossible not to notice this song-mockery, and the addressee understands everything. As well as transparent hints of racial superiority.

Well, the tribune is very suitable for the message: the audience here are hundreds of millions of people, all of Europe and the surrounding area. And if it’s too late to have seen it live – youtube will help.

The current world situation is tense: a fresh ultimatum to Iran, and Europe recoiling and hesitating on the Iranian issue. Constant provocation on the border with Syria. On May 14, Trump opens the US Embassy in Jerusalem. Netanyahu has just called on all countries to transfer their embassies there and this blows up the Islamic world. Even the Arab allies of Israel are now full of indignation and appear as seriously brewed cereal.

And someone is going to throw off the mask of an obedient puppet and threatens to become a Master himself.

An expert from the news agency VistaNews believes Israel continued its expansion into the world arena and strengthened its position in Syria. After the destruction of the Russian “Pantsir-S1”, the triumphant victory of Netta Barzilai in the Lisbon Eurovision Song Contest – 2018 revealed the entire political underpinnings of the music contest.

Well, as we know, “Pantsir –S” was damaged only after it fired at full reserve, blocking the way of the top ten missiles flying into Syria.

But there is also a high space – at this very time Uranus, a planet of surprises and coups, enters the sign of Taurus for 7 years. Stargazers remember that the State of Israel arose on May 14, 1948 (now its 70th anniversary). Israel is born under the sign of Taurus (and gold too), and the newest influence of Uranus will necessarily affect its policy and existence.

The whole situation with Netta is rigidly symbolized. Netanyahu (whose name, perhaps, is implied by Netta) congratulated the singer so that half the world twisted. But this is from ignorance. Because, using the play of words in Hebrew, he called her “cute” and “cow” at the same time. Cow, she’s a golden Taurus – it’s not an insult! And the horned pigtails on Netta’s head talk about it. This perfectly falls into our scheme of the calf challenge of our time. The world political fabric is straining, waiting for changes.

In any case, Netta with her song is a sign that cannot be ignored. It seems that Israel approaches a certain Rubicon, after which its fate will not be the same.” (Translation by Galima Galiullina)

Apparently, Netta’s appearance at Eurovision was not only an act of abduction of Europe (in a philosophical and geographical sense, because Israel is not in Europe), but also a psychological operation to prepare the world public for further unprecedented acts by the apartheid state.

The world watched the political theater and thought only of how indecently the fussy and terribly ugly singer was, but her task was not to enchant you with a sweet voice or charming appearance (in the past the world swallowed a pill – a bearded “woman”.) Netta’s task was to be the messiah of Israel, playfully trampling the old world of decency, humanism and standards of democracy. And see then what happens.

And, so it is interesting how the world will react to the phenomenon of Netta-Messiah. Will it become a catalyst for humane and honest people around the world to increase resistance to the outlaw state of Israel? Or will the world indifferently shrug its shoulders and wait for new spectacles?

Will the ritual sacrifice of unarmed people in the encampment of the concentration camp be a catalyst for the BDS movement in the entire civilized world, an impulse to unite all progressive forces against apartheid and genocide?