A viral TikTok showing a Black man being aggressively pulled out of the passenger seat after refusing to show...
Read more

By Gordon Duff, Senior EditorSome areas of the country, the US, are having low COVID death rates, we don’t...
Read more

WASHINGTON (Times of Israel) — US President Donald Trump on Wednesday again declined to commit to a peaceful transfer of power if he loses the Nov. 3 presidential election.

“We’re going to have to see what happens,” Trump said at a news conference, responding to a question about whether he’d commit to a peaceful transfer of power. “You know that I’ve been complaining very strongly about the ballots, and the ballots are a disaster.”

Trump has been pressing a monthslong campaign against mail-in voting this November by tweeting and speaking out critically about the practice. More states are encouraging mail-in voting to keep voters safe amid the coronavirus pandemic.

The president, who uses mail-in voting himself, has tried to distinguish between states that automatically send mail ballots to all registered voters and those, like Florida, that send them only to voters who request a mail ballot.

Trump has baselessly claimed widespread mail voting will lead to massive fraud. The five states that routinely send mail ballots to all voters have seen no significant fraud.

Trump on Wednesday appeared to suggest that if states got “rid of” the unsolicited mailing of ballots there would be no concern about fraud or peaceful transfers of power. 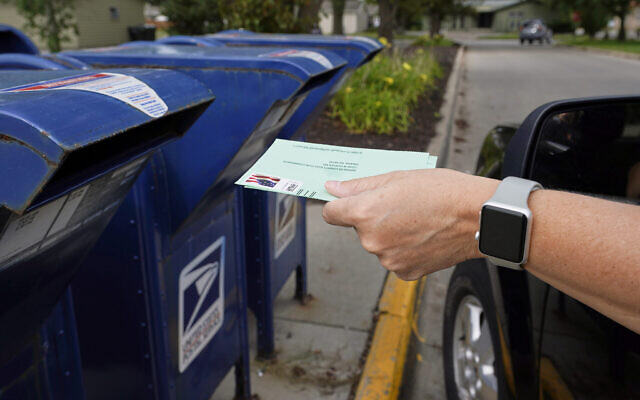 In this August 18, 2020, file photo, a person drops applications for mail-in-ballots into a mail box in Omaha, Nebraska (AP Photo/Nati Harnik, File)

In a July interview, Trump similarly refused to commit to accepting the results, and he made similar comments ahead of the 2016 election.

The Biden campaign responded Wednesday, as it did after Trump’s July comments: “The American people will decide this election. And the United States government is perfectly capable of escorting trespassers out of the White House.”

It is highly unusual that a sitting president would express less than complete confidence in the American democracy’s electoral process. But Trump four years ago, when in the closing stages of his race against Hillary Clinton, also declined to commit to honoring the election results if the Democrat won.

When asked during an October 2016 debate about whether he would abide by the voters’ will, Trump responded that he would “keep you in suspense.”

It’s unlikely that any chaos in states with universal mail-in voting will cause the election result to be inaccurately tabulated, as Trump has suggested.

The five states that already have such balloting have had time to ramp up their systems, while four states newly adopting it — California, New Jersey, Nevada and Vermont — have not. Washington, D.C., is also newly adopting it.

Of those nine states, only Nevada is a battleground, worth six electoral votes and likely to be pivotal only in a national presidential deadlock.

California, New Jersey, Vermont and D.C. are overwhelmingly Democratic and likely to be won by that party’s nominee, former Vice President Joe Biden.

Gordon Duff is a Marine combat veteran of the Vietnam War. He is a disabled veteran and has worked on veterans and POW issues for decades. Gordon is an accredited diplomat and is generally accepted as one of the top global intelligence specialists. He manages the world’s largest private intelligence organization and regularly consults with governments challenged by security issues.

Duff has traveled extensively, is published around the world and is a regular guest on TV and radio in more than “several” countries. He is also a trained chef, wine enthusiast, avid motorcyclist and gunsmith specializing in historical weapons and restoration. Business experience and interests are in energy and defense technology.

A viral TikTok showing a Black man being aggressively pulled out of the passenger seat after refusing to show...
Read more
Military

By Gordon Duff, Senior EditorSome areas of the country, the US, are having low COVID death rates, we don’t know why.Nobody talks about it...
Read more
COVID-19

This Week in Leftist Violence and Intimidation Vol. 9

Protesters attacked police officers on both the East and West Coast this week. A protest in Boston saw Antifa members eat an animal heart...
Read more

A viral TikTok showing a Black man being aggressively pulled out of the passenger seat after refusing to show his ID forced police in...
Read more

By Gordon Duff, Senior EditorSome areas of the country, the US, are having low COVID death rates, we don’t know why.Nobody talks about it...
Read more

A new survey found that President Donald Trump’s approval rating among likely black voters skyrocketed between Monday and Friday of this week. The results...
Read more

This Week in Leftist Violence and Intimidation Vol. 9