South Africa is seeing a surge of coronavirus cases, largely hitting the Gauteng province, home to the capital of...
Read more

Stone will no longer have to report to prison after the White House suddenly announced that the president decided...
Read more

As you read ahead and potentially find value in this article, please consider supporting my work and that of Project Peace On Earth by:

Americans seem to have a short fuse memory when it comes to remembering that one time we, all of us, were once immigrants to this country.   Therefore, it is especially painful to watch America’s treatment of immigrants who have traveled to our country, legally or illegally, to seek asylum and/or find or make a better life, which is now on display for our whole world to see. Witnessing this most desperate lack of basic decency brings me to a point of both wanting to cry at the gut and vomit.

As you read ahead I strongly encourage you to keep reminding yourself of these extremely wise words of Elisabeth Kubler-Ross, M.D..  Swiss American psychiatrist (1926-2004), who pioneered near-death studies.  She was the author of the groundbreaking book On Death and Dying (1969), where she first discussed her theory of the five stages of grief.

“We are very slow learners. We are continuing to destroy Mother Nature. We are involved in wars all over the globe. Each religious group believes it is the one and only one to teach the truth, and these groups persecute, kill and discriminate against all others. In the so-called civilized world, children are physically, sexually and/or emotionally abused; they are the leaders of our future.

…When children are raised in such a hostile and violent environment, how can we hope for a harmonious future for all the people of this world? We are supposed to be the peacekeepers on this planet, but look what we are doing on a daily basis!

…In this light, the purpose of human life is to achieve our own spiritual evolution, to get rid of negativity, to establish harmony among our physical, emotional, intellectual and spiritual quadrants, to learn to live in harmony within the family, community, nation, the whole world and all living things, treating all of mankind as brothers and sisters-thus making it finally possible to have peace on earth.”

Now and from this perspective, I reflect on the most inhuman treatment of innocent children within our country who are being barbarically separated from their parents and then placed in cages, not so dissimilarly from those children who, for years, are being treated this same way and much more violently in Palestine. 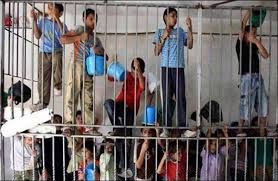 Within the context of the larger picture of a child’s innocence and loving bond with their parents, I encourage you to take a moment and place yourself,  in the shoes of a little 3 or 4-year-old boy or girl, who is or has witnessed the dramatically tearful pleas of their parents who have struggled, to no avail stay connected with their children, against militarized brutes who have forcibly separated them from their parents, in their mind, their God creators.  If you’re not completely familiar with the 30 articles of the UN’s Universal Declaration of Human Rights this may be a good time to read it.

A current picture of a US Detention Center 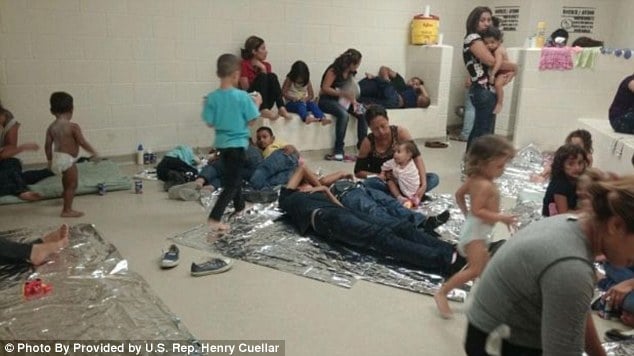 Respectively, you see, the process of separating a child from their loving parents constitutes a form of psychological torture. Why, because when a child is separated from normal acting and loving parents by whatever means, especially when forcibly, the child takes on a psychological scar that imprints the wound of their parent’s inability to protect them, their worthiness, as a child, of being lovingly protected and/or state of abandonment onto their subconscious and/or soul record.  This deep scar can be experienced as a lifelong and psychologically buried trauma that can forevermore affect the trajectory of their subconscious, rational thought, and decision-making process, and various life experience outcomes until the scar(s) are consciously addressed and given the space to heal.  Often, this thought process can compound issues around children’s natural tendency, for some reason, to take on the responsibility for some negative experience that occurs within a family setting.  Such situations, as with the case of children being forcibly separated from their family,  may likely prompt the child to think inwardly “What have I done wrong to make this happen”.

As an example, as a child, I remember when my parents would go out for a dinner date they would leave my sisters and myself a with a nice babysitter. Shortly after the babysitter would put me to bed my mind would wander and begin racing with worry about what would happen if my parents were in a car crash, didn’t live and return home. From my unrestrained and projected imagination, regardless of the circumstances, this car crash and their deaths would always somehow be my fault.

Now, I was fortunate to grow up in a home environment where my parents were both wonderful people from Louisiana.  They modeled to myself and sisters the good and loving family values of their parents and those which would later be shown on TV shows of the time like  “Leave It To Beaver”, “My Three Sons”, and “Mr. Rogers”.  My parents were good, kind, loving, honest, taught us to do our best, standing up for what was right, helping others who were less fortunate and much more. We never saw our parents argue, use foul language, tell a lie, smoke and drink.  They were always available for us to help us expand our interests in sports, arts, and academically.

One day, when I was about 4 or so, my mother took me with her to the grocery store. As we walked from aisle to aisle I stayed close to her noting very carefully the various boxes and cans of food that she placed into the shopping cart.  There was one aisle in particular that caught my attention and brought me, as a result, to a complete state distraction, the cereal box aisle.

As we walked down this aisle my mother picked up our normal cereal and then moved on. I continued to stand transfixed in front of mini-billboards of boxes that only spelled two things for me, toys (in the box) and fun eating inside.   After some period of time, I came back to the present and noted my mother was gone. I looked up and down the aisle. She was nowhere to be found. A panic came over me. Tears followed shortly thereafter as I ran for what seemed like an eternity from aisle to aisle looking for her. With each step I took, I became more panicked.  I began to cry hysterically.

Finally, as I rounded the corner of an aisle, there I saw her in her beautiful red dress. I ran up to her and threw my arms around her legs only then to notice that the face now looking down at me was not my mother. My crying intensified and the stranger woman gently knelt down to comfort and assure me that she would help me find my mother. This lovely woman then gently took me by the hand, continually comforted me and we walked to the front to find a store manager.

Shortly thereafter and with the help of the store’s audio announcement system, I was reunited with my mother, who herself had become frightened by our separation. My mother graciously thanked the kind woman who wore her exact same dress, thanked the store attendants and then later kindly reminded me of the importance of always staying close to her when we went out on future shopping expeditions.  I promised.

Now, in regards again to how our current conditions have played out in getting our country to a point where we are treating innocent immigrant children and their families with such indifferent disdain,  it’s vitally important to realize that we’ve haven’t gotten here overnight.  Respectively, here is my somewhat long and assorted account of how our collective history and consciousness has brought us to this dismal point in history and in our classification and blatant treatment of various people as, “The Others”.

“The opposite of love is not hate, its indifference.” Dr. Gerald Jampolsky, MD, a Child and Adult Psychiatrist and a graduate of Stanford University School of Medicine.

Historically speaking, the greater genesis of various countries, who paradoxically claimed to be of a Christian nature and then orchestrated horrific global invasions and genocides against non-militarily or technically advanced countries and their people (children, women and men) who just happened to possess strategically valued resources (oil, gas, metal ores, rubber, spices, farming produce, cheap labor, etc), mostly stem from the Catholic Church’s Pope Alexander VI and his proclaimed 1493 “Doctrine of Discovery” and Jewish “Talmudic” teachings. More on all this later as we move ahead.

Again, our current treatment of immigrants or people, seemingly deemed as “the Others”, unfortunately, falls not far from the tree and it’s deeply hidden roots from which our country was founded and later offered the bitter fruit of genocide to the some 60 million unsuspecting Native American inhabitants of North America.  Yes, and prior to this, the infamous and supposed founder of America, Christopher Columbus, appears by all reasonable accounts to be a full-blown psychopathic monster who had his men rape native women into submission, sold 9 and 10 year old girls into sexual slavery, beheaded people who were neck shackled when it was too much trouble his men to unlock and remove the shackle locks,  chopped off the hands of slaves who didn’t work hard enough and then made them wear their own hands around their necks as a further display of shame and much more.

Yes, later in 1620 the Mayflower and other ships delivered the Puritan Christian Pilgrims to the shores of North America.  They were graciously welcomed by the Native American people who taught our original colonizers how to survive harsh winters, grow and hunt for food.  Later these same Native Americans would innocently allow us to violate their trust by tricking them into giving the continent’s land for worthless glass…

South Africa is seeing a surge of coronavirus cases, largely hitting the Gauteng province, home to the capital of Johannesburg, where hospitals are reaching...
Read more
Donald Trump

Stone will no longer have to report to prison after the White House suddenly announced that the president decided to commute his sentence. Source link...
Read more
Border Security

Stone will no longer have to report to prison after the White House suddenly announced that the president decided to commute his sentence. Source link...
Read more