A group of 83 of the richest people in the world have called for “our governments to raise taxes on...
Read more

"This is obviously someone who's disturbed, someone who has a troubled soul," said Father John Currie. Source link
Read more

Dr. Mujahid Kamran is a highly-accomplished professor of physics. The New World Order has targeted him. Why? Is he another A.Q. Khan, using his knowledge of physics to defend his country? 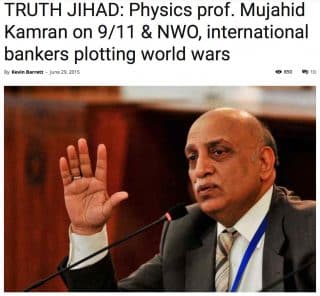 No, Dr. Kamran does not work on nuclear bombs. Instead, he hurls truth bombs. If and when the truth reaches critical mass, those truth bombs could prove even more destructive to the New World Order than all the multi-megaton warheads in existence.

Listen to Mujahid Kamran explain how a cabal of international bankers have plotted all of the major wars of the past century.

The undisguised political witch hunt of Dr. Kamran is a disgrace to Pakistan. If one cannot speak out about the usury-based NWO Empire in Muslim Pakistan, where can one speak the truth about this, the most important of all political issues?

Below is the section on Dr. Kamran’s case from a longer article by Zahir Ebrahim.

What lies behind the 2018 NAB corruption case brought against former VC of Punjab University?

It appears to me that given the heavy-handed way in which the specious case of corruption against Dr. Mujahid Kamran, former VC of Punjab University, has been publicly handcuffed by NAB and the respected professor unceremoniously jailed without a competent law court passing indictment, there is concerted effort afoot to discredit any remaining decent professionals in Pakistan’s academe with extreme measures. Perhaps to set en example for others. Where does this happen any place else on earth? No, it happens only in Pakistan. What’s going on?

The powers that be only want a decrepit wreck left of the nuclear armed nation before their coup de grâce of de-nuking Pakistan with the help of her own fifth columnists. Fourth and Fifth generation warfare which demoralizes the targeted nations from within, is what is being waged against Pakistan for a very long time. Only off late has its recognition even become part of the public discourse, with the Army Chief calling it by the misnomer “hybrid war”. There is nothing more hybrid about it just because it has a variety of modalities than there is about Third-gen warfare fought on land, sea and air (and space and cyberspace) with a variety of weapons and its own modalities. It’s a new more diabolically unified type of whole warfare with its underlying political theories, of which fabricating all the “colored” revolutions, internal chaos, debt-burden leading to austerity measures and local discontent, economic collapse, loss of domestic tranquility, terrorism, heightened and perpetual climate of fear, civil war, are all equally an integral part of the whole. Its overarching purpose is to defeat nations and their sovereignty from within, with the threat of Third-gen warfare only as the backdrop that is cunningly brought in at the right times under pretext of solving intractable problems that they have themselves manufactured. Ultimately, the coup de grâce, either as the merciful savior on victor’s terms, or dismemberment / re-partition under victor’s justice in the interest of peace. Not much different in final outcome than during World War I and II which successively remade the world order.

We are headed for the next phase of that, towards another world order. The final outcome sought is Global Governance under a single international political and financial authority, also called one-world government. Nations and regionalized Unions may continue to fly their own flags, but under global laws and global policies which are enforced from the central place. To transition to this one-world order, this new type of warfare has been chosen, as Third-gen warfare alone could not take a fiercely nationalistic world clinging to national sovereignty, to that outcome.

This modus operandi already has its own developed taxonomy and its own final outcome that is being sought in small baby-steps. Read the war literature of which plenty is available publicly from the Pentagon, private foundations and their liberally funded think-tanks, and in the writings of political philosophers seeking that final outcome. My old articles, and former Pakistani journalist now living in exile, Abid Jan’s articles, already spoke to this treacherous warfare more than a decade ago, right after 9-11. Then, we were only ‘conspiracy theorists’. Now that Pakistan’s Army Chief has only partially woken up to its reality and speaking to it publicly in subdued tones, without identifying the principal nemesis or the final outcome sought, the pseudo intellectuals of Pakistan are suddenly echoing the same as if they have chanced upon a brilliant discovery or knew it all along. Better late than never, but sometimes, it is too late to be late. As the cliché goes, in love and war, matters are time-critical.

Defending against this type of intellect-driven warfare needs intellectual sophistication and bold cunning, not weapon systems hardware and large standing armies. Even the USSR could not survive this diabolical type of imposed warfare, which was only in its preliminary stages during the Cold War. Today, it demands even more sophistication to thwart, which is evidently entirely lacking in the Pakistani national psyche – elites and plebes alike – regardless of how piously patriotic the establishment may pretend to be. Only sophistication in thought and sophistication in warfare can ease Pakistan out of its long running dilemma as a servile client state, not more begging bowls and more outstretched hands. From the war-mongers’ point of view, getting rid of establishment minds capable of such sophistication among their nemeses is the first order of business. That recognition also appears to be lacking in Pakistan’s intelligentsia and its establishment thinkers, that it is by design that mental midgets, only cunning in the modalities of domestic corruption, but otherwise compliant to every will of the massa regardless of its morality or long-term consequences to the nation, continually preside over her destiny. Does it take rocket science to discover that? Or only commonsense? Or perhaps having the courage of one’s convictions?

None in the universe can tolerate a Muslim nation being nuclear armed (with real teeth as opposed to boogieman’s show-teeth) at this stage of the world in transition to Global Governance, and here we have our newly elected super-patriotic Prime Minister along with the notable Army Chief going out with begging bowls in delegations once again to tyrannical and murderous rulers. Why are they seeking charity from the same proxy-service providers of powers that be who’d like to see Pakistan de-nuked? Are they too stupid, or too savvy? What is the quid pro quo being offered, and has already been committed to over the years as payment for our services in secret handshakes?

In my five open letters to Prime Minister Imran Khan, and one open letter to Chief Justice of Pakistan, Mian Saqib Nisar, I had boldly advocated breaking the bonds of servitude to our masters in both form and substance. And here I see our rulers pursuing exactly the opposite course of action while making all the appropriate noises in public relations. Acts speak louder than words even in ‘naya Pakistan’! I am certain the big brass know what they are doing when they shake all those dirty hands, for heavy lies the head that wears the crown. It is the public who does not know, and has to intelligently add two plus two to make four amidst the sea of deception and co-option that the rulers appear to be a part of. Should we all shut our eyes lest we glimpse the unspeakable truth, or, heaven forbid, dare to speak the unspeakable? Summun, bukmun, umyun, appears to be the better part of valor in the Islamic Republic of Pakistan!

Destroying Pakistan’s higher and lower education system is very much a part of this Fourth and Fifth Gen warfare, to produce only fanatics, useful idiots, mental midgets and cunning mercenaries among its new generations, and get rid of any intellectual opposition. Make the nation so starved, and so without ma’arifat (wherewithal), that they’d be easy to control by house niggers cunningly installed by the massa employing its staple of workhorses, from dictatorships to crippled democracies.

I see what’s happening to both Dr. Mujahid Kamran and Dr. Arshad Ali partially in the light of this overarching backdrop. Nothing in a “system” is ever in isolation. All its matters, big and small, are interconnected, but like the 90% of iceberg, may remain submerged beneath the surface. As Max Planck had observed, and the tracing of which had led to discovering the plagiarism case examined in this report:

“Modern physics has taught us that the nature of any system cannot be discovered by dividing it into its component parts and studying each part by itself, since such a method often implies the loss of important properties of the system. We must keep our attention fixed on the whole and on the interconnection between the parts.” — Max Planck

This “interconnection” is easily visible at least in the case of Dr. Mujahid Kamran, who happens to be the only institutional scholar in Pakistan who has even had the courage to commonsensically question and deconstruct the official narratives of empire, while all the rest of likkha-parrha jahils in the establishment of Pakistan and its barren intellectual space simply tow the official party-line whatever it may happen to be at any given time. The critics too retain the core axioms and presuppositions of the party-line in their mostly gibberish dissent. If the axioms are specious, the theorems and corollaries will be gibberish no matter how eruditely conceived! Only mental midgets and house niggers unable to reason from observations and first principles despite high-falutin credentials, are ever deceived by them. The rest are mercenaries!

I am, in fact, surprised that it took so long to nab Dr. Mujahid Kamran, and this tells me that his former political bosses had protected him. Why? I don’t know, since…

A group of 83 of the richest people in the world have called for “our governments to raise taxes on...
Read more
Donald Trump

Amid an increasingly politically divided landscape across sports and culture, NASCAR officials are considering banning political statements from cars, according to a report. Sports...
Read more
Christianity

"This is obviously someone who's disturbed, someone who has a troubled soul," said Father John Currie. Source link
Read more
China

Beijing issued new sanctions on three Republican lawmakers and a Trump administration official Monday, according to the Associated Press. In response to U.S. sanctions on party...
Read more
Law Enforcement

School Districts across the nation are grappling with whether to reopen and what reopening would look like to meet the various standards set out...
Read more

Amid an increasingly politically divided landscape across sports and culture, NASCAR officials are considering banning political statements from cars, according to a report. Sports...
Read more

"This is obviously someone who's disturbed, someone who has a troubled soul," said Father John Currie. Source link
Read more

Beijing issued new sanctions on three Republican lawmakers and a Trump administration official Monday, according to the Associated Press. In response to U.S. sanctions on party...
Read more

School Districts across the nation are grappling with whether to reopen and what reopening would look like to meet the various standards set out...
Read more