“If you’re an American adult, it is more likely than not that China...
Read more

Breve:
An epistemological satire from the Stone-Age to the present day characterized as a riposte to the one bad-guy that every creative type loves to hate, an academic (PLF)! When the dust finally settles, and all is said and done, academia is stripped down to its skivvies, language is restored to its rightful owners, art is reinstated to its socially germane status, and the earth once again spins true on its axis … Yup, that’s how the world works (see title).

A Silly Academic Story; 1, 2, 3:
The Horse Latitudes:
Trollin’, Over-Sharin’ an’ Scientific Methods:
A Back-Door to Your Tech:

From kindergarten to graduate school, every educator’s lecture I endured, the one thing they all professed, with the exception of a few I didn’t understand due to unusual oratory styles and mumbling, was that language’s spoken aspect holds meaning, and that it’s a consensual thing. You know, 3″ is not 9″ –standardization. Strangely, when it came to explaining its origin and authorship, their logic got real fuzzy, I mean down right spooky, which immediately moved my thinking to critical mode … pointy pencils up!

How was the beast born is usually the first order of business to an inquisitive mind. And what better way to answer that question than with one of the first examples of language from the Stone-Age, which BTW contradicts all three of the foundational canons in their silly story; 1) speech holds meaning, 2) it’s a consensual thing, and 3) spooky origins!

The cave at Altamira for example, among many of its other social accomplishments, is a detailed analysis of the galactic cycle; what we call a Great-Age (Dalpe, 2018). Yes, I just cited myself –deal with it! It’s what artists do, we tread new ground. As Paul Klee suggested, “Art does not reproduce the visible (that is, citations, peer reviews and what is known); rather, it makes visible” (Klee, circa 1900s). Nevertheless, I will also cite the Titans that created Atlamira with their visual communications from almost 40,000 years ago (illustration-1).

However, we are going to have to spend a bit of time in their domain, what we might call art. And as a picture is worth a thousand words PLFs should be able to handle it. Yet, to be on the safe-side, I added call-outs, exploded views, and diagrams to guide them in the right direction, so they don’t wander off into strange thinking, like bison worship and secret messages from the Stone-Age. (HINT: as there are more than a baker’s dozen bison, they had a damn good reason for illustrating each. Thus, what they were saying was metaphorically inferred between the bison (lines), as it were!) 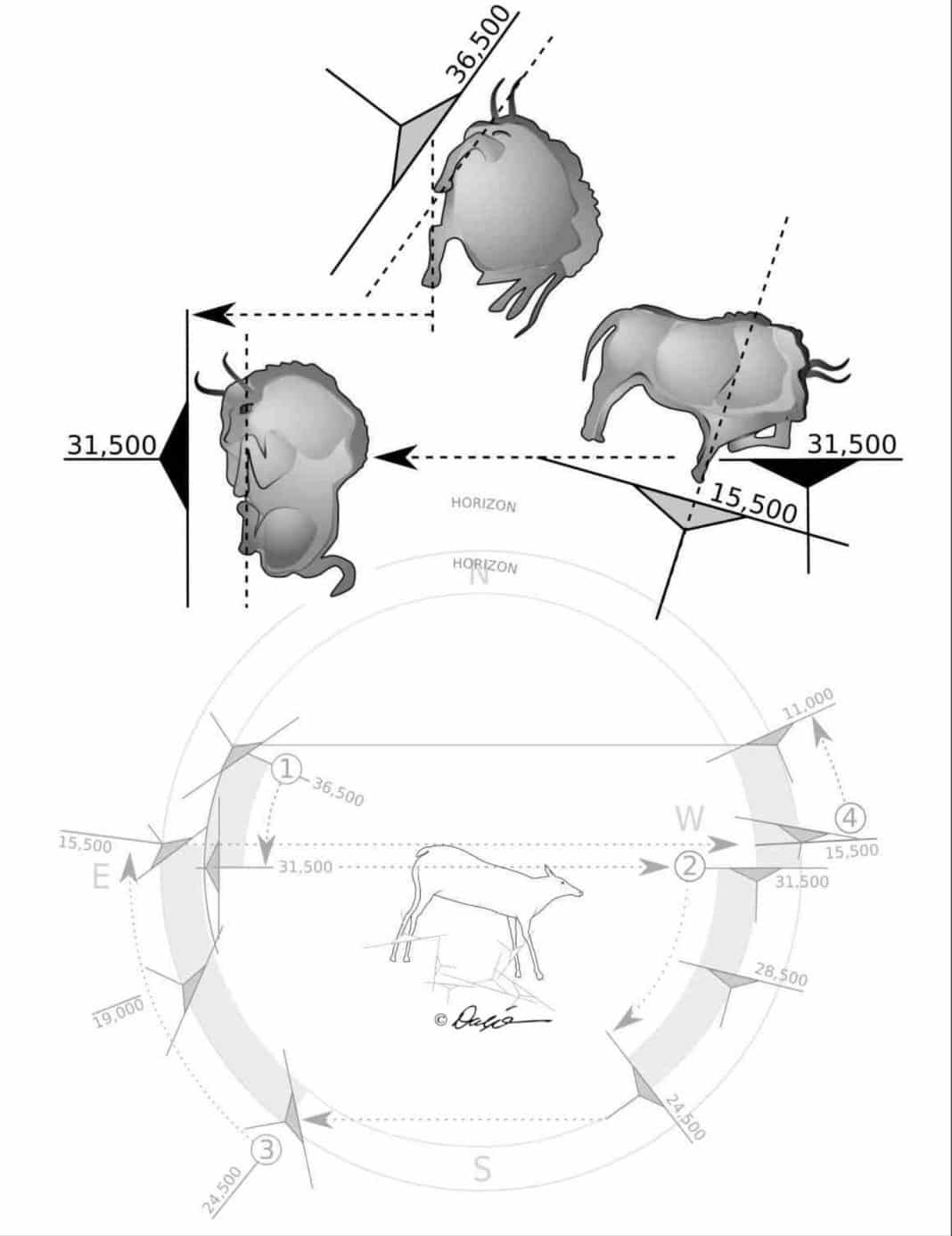 As those visual ideas from so long ago are understood today (if you can figure out what they were saying, beyond establishing a Great-Age), it proves language is not a consensual process, nor is it spoken. Because that’s how knowledge is passed down through the millenniums of time –visually; that’s its primary function. The spoken aspect of language is incidental, because it’s only a sonic symbol. It’s an expedient social system, that’s all. It allows us to walk and communicate at the same time, that is, to express something more intelligent than an emotional outburst. Strangely, there are some among us that still haven’t figured that out after millenniums.

My partner for example, has a propensity of stopping dead in her tracks whenever she has something to say; regardless of how great or small. I can’t explain it to her, because she would make us late, and I only think of it when we are on the run! Yup, that’s called a catch-22, and explains the lag in the tech. Hopefully, some day though …

For example, when I correct an academic on such matters, that is, the Visual-Thing, by their reaction, you would think that I stepped on their damn tail. They go through the initial stages of grief; shock, denial, and rage, quicker than one can fall off a log in Pookaville. The shock comes from being challenged. Their denial is in the form of a trick procedural question, “What word-smith ever, I wonda, can you cite to back-up ye claims? Nair-one I have ever heard of!” Which is really an authoritative statement posing as an innocent question . I mean come on. How does one challenge academia by citing an academic? Is it possible they can be that dumb? (I’m sorry, did I say that aloud?)

When their, “authoritative statement posing as a innocent question” doesn’t have the desired effect, that is, your’s truly walking away with my tail between my legs, they become unbalanced with rage. However, as they were also trained to be gracious when dialoguing, they begin to simmer, and it’s only a matter of time before they come to a full boil and blow a gasket. Usually their venting takes the form of calumny, like, “Did’ya know how unfeelin’ the Visual-Thing sounds to a blind person?” From which they build an elaborate character assassination theme, which is followed by the inevitable cabaret of removing their words from my mouth.

With absolute certainty, the one thing they will never do is address the issue, because their mind was trained in the Religious-Thing. And as I said, you don’t question religious beliefs. Hence, round and round we go, gen after gen. Nope, that’s not a catch-22. That’s the infamous tail chase. We run into the catch when we try to stop the merry go round. The only way to do that is to explain what language is. But to explain it to an academic, you have to go round and round. Hence the catch, (read the last few paragraphs again, again and again …). PLF logic is full of it, … uh, I mean them, conundrums that is.

What perplexes me is, did their mind-training make them that way, or were they always thus? Nope, that’s not a catch-22, that’s the chicken ‘n egg scenario. The difference between them is subtle in this particular case, because the scenario is wrapped in an enigma, that is, as everybody is trained, we will never know which came first. Hence, it’s a combo, a 22 chicken ‘n egg catch.

So far, two of the three foundational canons in their silly story, 1) speech holds meaning, and 2) it’s a consensual thing, are now moot points! However cannon 3), spooky origins, although no longer creditable, let’s put that pooka out to pasture permanently.

As Cro-Magnon was no where on the European continent during the first 8 millenniums when Altamira was conceived and framed, and as there is no prior evidence of Cro-Meandering’s basic social developmental skills necessary to convey such complex ideas socially, they could not possibility have been its author. Nor could they have contributed in any meaningful way when they finally did arrive, excluding hand print graffiti, because that’s just monkey see monkey do without a clue.

I mean you need to learn how to crawl before you can walk, much less hit the ground running to socially develop a unified theory of the galactic cycle. Such a social feat demands untold generations of observations and recordings to be able to apperceive such a thing; not to even mention a self awareness of how the human mind naturally speaks so as to be able to visually communicate such complex theories socially across the ages (archetypes), both of which were established at Chauvet (Dalpe, 2018) … (yes, I know, I cited myself again, don’t dwell). And to be absolutely clear, by its author, I mean language itself. Because the Altamira cave is one of the earliest instances of the virtualization of the human mind of theoretical ideas expressed in a timeless social context.

Likewise, we can dismiss academia’s spooky story as to whom we give credit for its creation. That’s right, our Neanderthal brothers and sisters were/are the more intelligent of the two genus, which explains why sapiens don’t understand the mind-tech; it’s not theirs! It’s like installing Debian-9 in an old 486, which makes a sapiens’ mind go completely loopy, and has remained so for the last 40,000 years!

With such a keen eye for detail, and like the razor sharp instincts of Chief Inspector Clouseau of the Surete, instead of reading the dates written on the cave walls, … wait for it, introductory music please: (da dum, da dum– da dum, da dum, da dum– da dum, du-waaaa– da da duu zaaaa!) Cro-Academia sent legions of their brightest and best descending into the cave of Altamira with their magnifying glasses to analyze the calcium build up on the paint to determine the age of the so called art (SERP, 2012).

From such a farcical academic Shot in the Dark, the “massage” becomes clear, the academic mind is as chaotic as a bison worshiper’s. The latter sees things that are not there, while the former doesn’t see what is, which is not a surprise, because both blur the line between science and faith. As I said, they’re religious learners with a systematic bias. It’s just a matter of degrees in training as to which way they go. Too much training is tantamount to receiving a rather large “beump” on the head, while just a touch of it, and their belfry teams with little flying “meuths”!

Hence, academia will faithfully sail for another thousand leagues in the wrong direction before they figure out they sailed into the horse latitudes. Meanwhile, down on the farm in Pookaville, they’re just wandering in circles and falling into one rabbit hole after the next.

To read the various dates the Mousterians were recording, simply look at the direction and elevation of a bison’s front legs. And if they did something funky with the leg that is farthest from us, they were referring to a date range. That is, they were speaking of an age.

For example, the top bison in illustration-2 spoke of the first five millenniums of the previous Great Age, 36,500-31,500 BC. Illustration-2 is a detail of three of the…

The Trump administration on Monday rejected nearly all of China’s claims in the South China Sea – wading into...
Read more
Israel

Is It Safe To Fly? – Veterans Today

Health Editor’s Note:  Although the CDC recommends you stay at home to both prevent the spread of and to not contract coronavirus, some of...
Read more