Lesson About Guns and Gun Control Every Politician Should Learn

Most of our readers know by now that Robert Francis ‘Beto’ O’Rourke called for the confiscation of AR-15s at last weeks Democratic Party debate.

While his call for gun confiscation may have been well received in certain quarters in most of the country people recoiled in horror at the thought.

“Beto” may have accidentally taught a lesson to Democrats and other politicians about guns and gun control that they definitely need to know.

Calling for gun confiscation is a career ending call, as the following cartoon illustrates:

Not only is calling for gun confiscation a career-ender in America for a Presidential candidate, it’s political suicide in Texas.

Here’s the latest on Beto’s call for confiscation of AR-15s:

After Beto Promises Gun Confiscation, He Immediately Reports Gun Owner To FBI For ‘Come and Take It’ Threat

Would you give up your AR-15 if the government ordered you to?

so are you going to be the one kicking down doors @BetoORourke? or are you just demanding the nation be thrown into a bloodbath while you sit comfortably behind your armed security?

“Hell yes, we’re going to take your AR-15, your AK-47!” he screamed at last night’s debate. “We’re not going to allow it to be used against a fellow American anymore.”

Earlier, at a campaign event in Charlottesville, Virginia, O’Rourke said, “Americans who own AR-15s and AK-47s will have to sell them to the government. We’re not going to allow them to stay on our friends, to show up in our communities, to be used against us in our synagogues, our churches, our mosques, our Walmarts, our public places.”

I was asked how I’d address people’s fears that we will take away their assault rifles.

I want to be clear: That’s exactly what we’re going to do. Americans who own AR-15s and AK-47s will have to sell their assault weapons. All of them. pic.twitter.com/YbnSsz3bVy

And Beto’s already trying to cash in on the opportunity by selling shirts for $30 each on his website.

But after last night’s debate, a Texas Representative did what any law abiding gun owner would do facing Beto’s threat of a mandatory gun confiscation. He basically told the presidential candidate: “Come and take it.”

Not included among the alleged majority of Americans who support a so-called “assault weapons” ban is Texas state Rep. Briscoe Cain. In a since-removed tweet reportedly posted during Thursday night’s debate, he wrote, “My AR is ready for you Robert Francis.”

It was clear to anyone who read it that Cain was saying, in effect, “If you come for my constitutionally guaranteed right to own firearms, then expect trouble.” What’s not so clear is whether his tweet constituted a threat. O’Rourke thought it did.

This is a death threat, Representative. Clearly, you shouldn’t own an AR-15—and neither should anyone else. pic.twitter.com/jsiZmwjMDs

Not deterred by O’Rourke trash-talking or Twitter’s actions, Cain responded by describing the skateboard-rocking Democrat presidential candidate as a “child.”

The entire liberal media then proceeded to refer to Cain’s message as “a death threat,” clearly taking their marching orders from O’Rourke.

But you won’t believe what happened next.

Beto actually contacted the FBI about the so-called “death threat,” and as we speak is trying to strip Rep. Cain of his Second Amendment rights.

So, if you stand up to a bully like O’Rourke, he’ll report you to the FBI and make sure you lose your guns.

O’Rourke said in an interview later Friday morning that his campaign staff had contacted the FBI and Twitter regarding Cain’s tweet.

“I mean, anytime you have somebody threatening to use violence against somebody in this country to resolve a political issue, or really for any reason, that’s a matter for law enforcement,” O’Rourke told CNN.

“But it really drives home the point better than I could have made,” he continued. “Rep. Briscoe Cain is making the case that no one should have an AR-15 that they can hold over someone else in this country — say, ‘Look, if we disagree on something, let me introduce you to my AR-15.’ Absolutely wrong.”

So just to make sure we’re clear, Beto O’Rourke is already in the process of taking away our Second Amendment rights. He’s not even waiting until he wins the election. If you stand up to him, he’ll take away your guns. Because saying “Come and take it” is now considered a “death threat.” But saying “Hell yes, we’re going to take away your guns” is just policy. 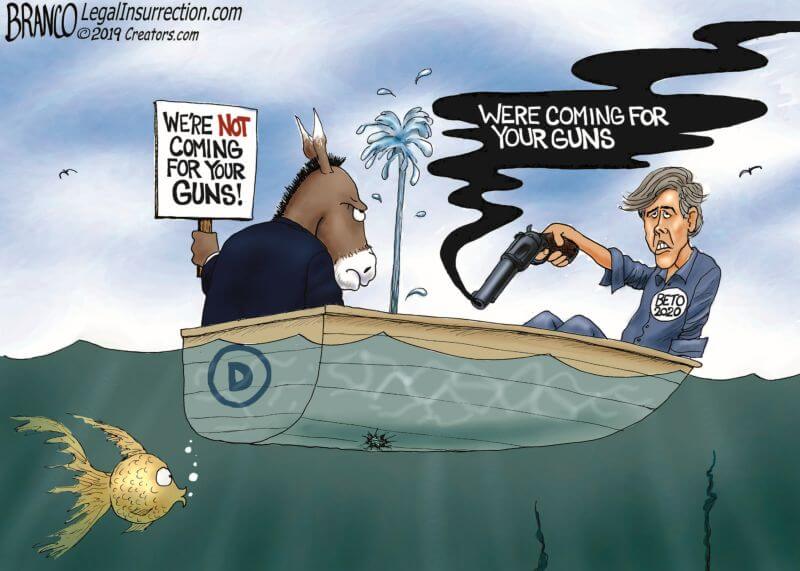 Now, as of today, if you tell a potential tyrant who wants to take your guns away, “Come and take it,” that’s EXACTLY WHAT BETO WILL DO.

Except he’ll send in the FBI to do his dirty work for him. Because of course.

What do you think of Congressman O’Rourke and his pledge to destroy the Second Amendment?