Women of all ages, but particularly of childbearing years, are now...
Read more

Two Guatemalan men who illegally crossed the U.S.-Mexico border and led across other migrants pleaded guilty on Thursday in...
Read more

Something weird is happening at WHO headquarters in Geneva. On Saturday, July 23, 2022, WHO director-general Tedros Adhanom Ghebreyesus held a press conference in which he declared a Public Health Emergency of International Concern (PHEIC) pertaining to the monkeypox virus.

Dr. Tedros Adhanom Ghebreyesus, took this decision unilaterally against a majority vote of the Second Meeting of the International Health Regulations (2005) (IHR) Emergency Committee (9 against, 6 in favor)  held on Thursday, 21 July 2022, in Geneva (from 12:00 noon to 19:00pm Geneva Time CEST), two days prior to Dr. Tedros’s Press Conference which was held on Saturday, 23 July 2022:

“We have an outbreak that has spread around the world rapidly through new modes of transmission…I have decided that the global monkeypox outbreak represents a public health emergency of international concern.”

Did Tedros have the support of  his colleagues? Is he in conflict of interest? According to Bloomberg:

“The declaration from Tedros … underscores divisions within the organization over the severity of the threat. The pathogen typically causes flu-like symptoms, followed by a rash that often starts on the face and spreads down the belly.  (Bloomberg, emphasis added)

What Bloomberg failed to mention is Dr. Tedros’s Bombshell Statement:

“An outbreak that is concentrated among men who have sex with men”:

“Although I [Tedros] am declaring a public health emergency of international concern, for the moment this is an outbreak that is concentrated among men who have sex with men, especially those with multiple sexual partners.

That means that this is an outbreak that can be stopped with the right strategies in the right groups.

It’s therefore essential that all countries work closely with communities of men who have sex with men, to design and deliver effective information and services, and to adopt measures that protect the health, human rights and dignity of affected communities.

Stigma and discrimination can be as dangerous as any virus.

In addition to our recommendations to countries, I am also calling on civil society organizations, including those with experience in working with people living with HIV, to work with us on fighting stigma and discrimination.

Where is the science?  What are the implications?

Bear in mind that this was a personalized decision by Dr. Tedros, in defiance of the IHR Committee’ Decision NOT to implement a PHEIC on behalf of  194 member states of the WHO.

Does the above statement constitute an encroachment of the fundamental rights of the LGBT Community which is currently the object of the emergency measures? In the words of the IHR Emergency Committee report cited below: “interventions [are] targeted to this segment of the population [LGBT].”

The calling of a PHEIC has already opened up a Pandora’s box.

Five days after Tedros’ announcement  the Mayor of San Fransisco  declared a “state of emergency”.

Video: Michel Chossudovsky and Peter Koenig on the WHO Monkeypox Agenda

With thanks to Stephen Frost, Webinar presentation, recorded on August 2, 2022

Before proceeding with a careful review of the WHO report, a few words on the “unspoken history” of this unfolding monkeypox pandemic

May 5, 2022: Beginning of the alleged “real time outbreak”. First monkeypox reported by the U.K. to the WHO.

May 15, 2022: Marks the commencement of the monkeypox epidemic in the NTI “Simulated Scenario” (presented to the Munich Security Conference in March 2021), leading up to January 2023 (83 countries affected) with 70 million confirmed cases and 1.3 million deaths. (See below) 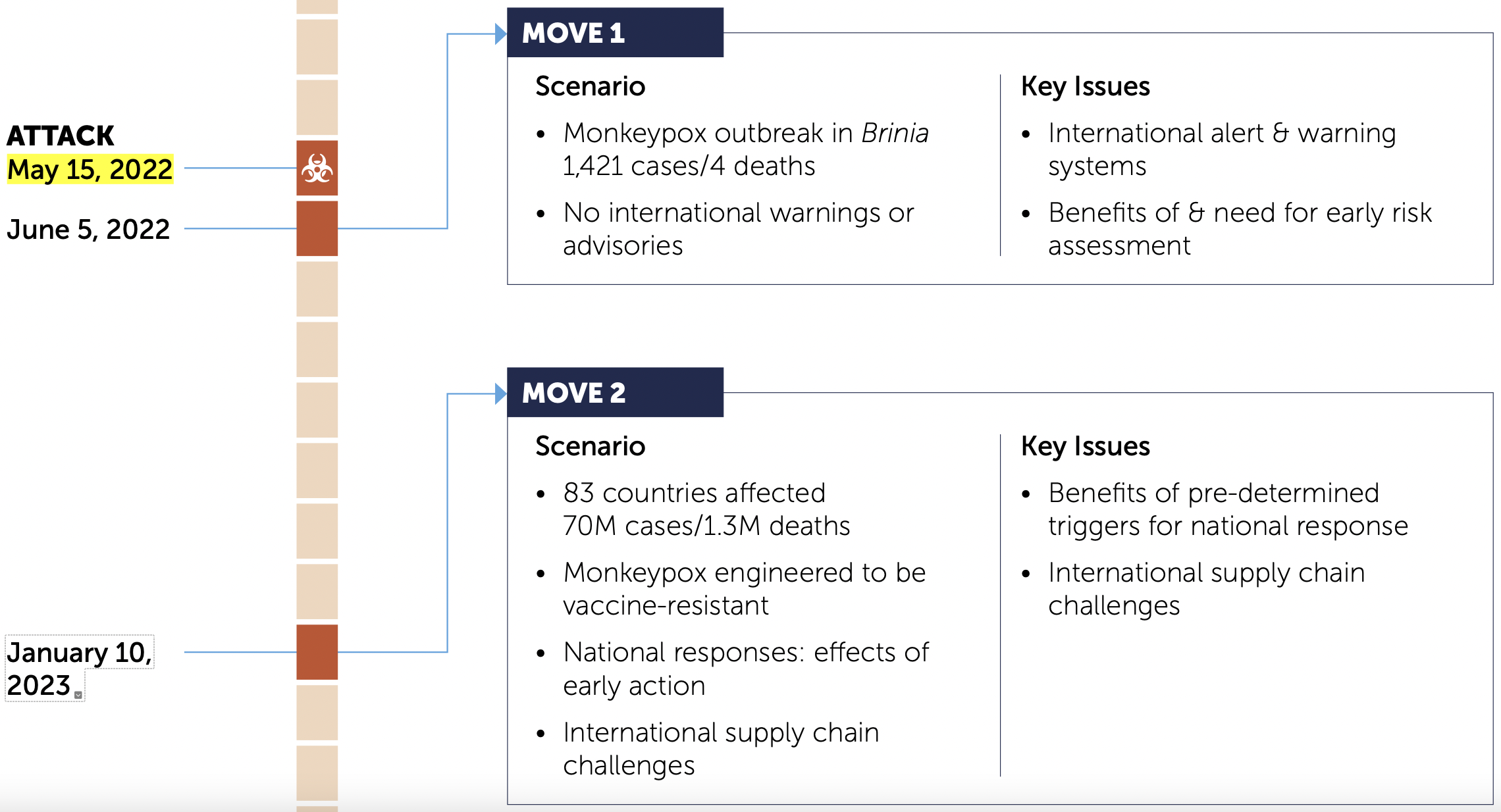 For further details on the Timeline and Simulated Scenario see:

The Questionable 99% “Estimate”. The Emergency Committee Meeting,  July 21, 2022 in Geneva

There is a long history of viral transmission pertaining to the monkeypox pathogen going back to the 1950s. The man to man transmission (MSM) is not corroborated by peer reviewed reports published prior to the May 2022 outbreak.

Below is a review of the published report of “The Second Meeting of the International Health Regulations (2005) (IHR) Emergency Committee”  regarding the alleged multi-country outbreak of monkeypox. This meeting was held two days prior to Dr. Tedros’s Press Conference.

The report provides details on the thrust of the WHO Director-General’s decision to launch a Public Health Emergency of International Concern (PHEIC), focussing on the incidence of the monkeypox virus on “bisexual, gay and men who have sex with men”. Of significance, the members of this Committee (21 July 2022) turned down Dr. Tedros proposal to launch the PHEIC.

Below are selected and summarized quotations of a rather long document. Read carefully (the meeting in Geneva lasted for five hours):

“The majority of reported cases of monkeypox currently are in males, and most of these cases occur among males who identified themselves as gay, bisexual and other men who have sex with men (MSM), in urban areas, and are clustered in social and sexual networks.

There has also been a significant rise in the number of cases in countries in West and Central Africa, with an apparent difference in the demographic profile maintained than that observed in Europe and the Americas, with more women and children amongst the cases.

The genome sequence of the virus obtained in several countries shows some divergence from the West African clade.

Representatives of Spain, the United Kingdom, the United States, Canada and Nigeria updated the Committee (in this order) on the epidemiological situation in their countries and their current response efforts. With the exception of Nigeria, the remaining four countries reported that 99% of cases were occurring in MSM, and mainly among those with multiple partners.

In the United States, cases of monkeypox are widely distributed across the country, although most cases are concentrated in three large cities. While a few cases have occurred in children and a pregnant woman, 99% are related to male-to-male sexual contact.

In Canada, 99% of cases have occurred among MSM, and the country is taking a broad approach to pre-exposure prophylaxis, given the challenges with contact tracing; and is strongly focused on engagement with community-led organizations supporting key affected populations groups.

Nigeria recorded a little over 800 cases of monkeypox between September 2017 and 10 July 2022 and has seen at 3% case fatality ratio among confirmed cases. Cases are predominantly in men aged 31 to 40 years; there was no evidence of sexual transmission presented. The highest number of annually reported cases since 2017 has been observed in 2022.”

[Members of the Committee underscored the following]:

“The moral duty to deploy all means and tools available to respond to the event, as highlighted by leaders of the LGBTI+ communities from several countries, bearing in mind that the community currently most affected outside Africa is the same initially reported to be affected in the early stages of HIV/AIDS pandemic;

The vast majority of cases are observed among MSM with multiple partners, and, despite the operational challenges, there is the opportunity to stop ongoing transmission with interventions targeted to this segment of the population. Cases observed beyond this population group, including among health workers are, to date, limited; …”

The WHO document does not provide relevant sources (pertaining to scientific analysis) nor the data on the alleged monkeypox “confirmed cases”.

What the WHO confirms is that the flawed RT-PCR test was the basis of monkeypox data collection and tabulation (since early May) (see below).

“This [RT-PCR] assay detects DNA at varying concentrations, providing a qualitative result of either positive, negative, or inconclusive in the identification of Monkeypox virus infections.” (CDC)

It sounds contradictory: on December 31, 2021, the CDC declared that the PCR test was invalid pertaining to SARS-CoV-2 (unauthorized by the FDA). According to the CDC advisory (acknowledging the failures of the RT-PCR test):

“CDC encourages laboratories to consider adoption of a multiplexed method that can facilitate detection and differentiation of SARS-CoV-2 and influenza”.

Let’s not get things mixed up: Versatility of the RT-PCR test. “Anything Goes”.

If you test RT-PCR positive for COVID-19, it may be “mistakenly” tabulated as a “positive” Monkeypox…