The Trump phenomenon, to paraphrase Lincoln, who may not have said this at all, “you can fool some of the people all of the time,” deeply parallels the elections of 1824 and 1828. This is when consummate “outsider,” a tough-as-nails backwoods “westerner” and war hero, Andrew Jackson, spouting conspiracy theories about corruption and “elites” rose to the presidency. 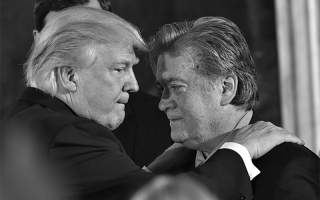 Trump advisor Steve Bannon actually studied Jackson and his rise to prominence, followed by a checkered presidency of broken treaties and violent retribution against his personal enemies.

Both Trump and Jackson brought first ladies to the White House with “deeply singed” reputations.

This is where the comparison ends. Jackson typically settled his personal grudges with a pistol or sword, not his mouth or lawyers. He warred on the Rothschilds’ agents and their national bank set up by Federalist Alexander Hamilton.

Above all, Jackson was the “real deal,” opposing elites who were then as they are today, utterly corrupt. Trump is certainly not the “real deal,” not with a cabinet of the “worst of the worst” of corrupt elites and policies and appointments intended to stifle democratic institutions.

Trump’s court appointments, rushed through congress, most unvetted and unqualified, dark histories of personal bias and corruption, many young enough to serve for decades, are intended to protect and serve the corrupt elites from public scrutiny and any legal process.

At the root of it all, in America as with America’s NATO allies, are the central banks that date back centuries.

Jackson, in 1833, shut down the bank run by Nicholas Biddle and backed by powerful “bought and paid for” Senator Henry Clay. Jackson did so defending the constitution which clearly prohibited a central bank which the founding fathers recognized as the root cause of Europe’s continual wars.

A year later, in 1834, congress censured Jackson for abusing presidential power. His congress was “owned” by Biddle and his European masters.

Today, we have a “dime store” Jackson, someone with the swagger and none of the real muscle. Perhaps Trump saw another example of an American who stood against the central bank, that being John Kennedy and his fate and that of his brother Robert.

Were one to follow this vein, as to who owns and controls the central banks, and how the restoration of the central bank in 1913 re-empowered America’s European masters under the Federal Reserve Act, a fuller backdrop for understanding America’s crippled political scene would entail. Our focus is elsewhere, and America’s own debt slavery is an important component for certain.

Increasingly, the world is terrified of America. A single nation drowning in 21 trillion dollars of bankruptcy is blackmailing the world.

America clearly can’t manage its own affairs at home, a nation with a third of its citizens living in or near absolute poverty, a nation ruled by functional illiterates or faithless warmongers, yet America continues its military crusade for what it calls “justice and freedom” that its own citizens seldom see.

Sanctions, trade wars and military bullying focused on rebuilding world divides, restoring world tensions and finding adversaries where partners or friends may well have been, is the watchword of American policy. Why?

America is breaking the rules. There was always “wiggle room” in the hodge-podge of international law, room for “justified war” and a door opened for the “victor’s justice” we saw at the Nuremberg and Tokyo Tribunals after World War II.

Even that is gone today, and America’s domestic political meltdown is largely responsible.

Were one to look to the roots, even before Machiavelli, one might turn to Sun Tzu. In his Art of War, Sun Tzu advised a combatant to always build a golden bridge for a retreating enemy. In the world of nuclear brinksmanship, this might be more aptly be expressed as a lesson most learned as children on the school playing fields.

At one time, Americans themselves were politically astute, at least an activist core, including up to 40 million union members when they held sway over politics.

At one time, the primary concern of Americans was economics, the day to day issues of job security, rising prices and economic survival for the family.

Demagogues would drum beat about the dangers of communism or the threat of drugs. Hollywood would depict, almost continually, a Soviet occupation of America, films like Red Dawn or even, jokingly, The Russians are Coming, The Russians Are Coming. No sane person took it seriously

However, as most recognize, sanity isn’t now nor may ever have been the strong suit for many Americans.

Why Things Are Different

America was always strife with racial, religious and class differences. What few recognize is the regionalism that was initially expressed in the political aspirations of Andrew Jackson, America’s first populist “outsider.”

“Newt Gingrich has compared Trump to Jackson for some time. Rudolph Giuliani declared on election night that it was ‘like Andrew Jackson’s victory. This is the people beating the establishment.’”

That may seem a comforting comparison, since it locates Donald Trump in the American experience and makes his election seem less of a departure.

Is Trump’s victory really like Jackson’s? On the surface, yes: In 1828, an ‘outsider’ candidate appealed directly to the people against elites he called corrupt. A deeper look at Jackson’s victory complicates the comparison, but still says much about America then and now.

Jackson’s road to victory began with a defeat. He was a Tennessee politician and plantation owner turned soldier, a man who, unlike Trump, had deep experience in government. As a general, he became the greatest hero of the War of 1812, and capitalized on his fame by running for president in 1824. But the electoral votes were split between four candidates. The presidency was decided by the House of Representatives, which chose John Quincy Adams, the highly qualified secretary of state.

Jackson politely congratulated the winner but was seething. He soon declared the system was rigged. The Jacksonians’ phrase was ‘bargain and corruption’—they said the House speaker, Henry Clay, had thrown the vote in exchange for being named secretary of state.

This conspiracy theory added an element of rage to Jackson’s basic argument that he was simply owed the presidency. Although the House had voted in accordance with the Constitution, Jackson insisted that he should have automatically won because ‘the majority’ of the people supported him. (He’d actually won a plurality of the popular vote, 40 percent, which was politically significant but had no legal bearing.)

With an eye to the next election, he set out to upend the political system, which had been running predictably for a generation. A party founded by Thomas Jefferson had installed four consecutive presidents. Most elections were not even close. Relatively few people voted, and many lacked voting rights. But the franchise was expanding to include all white men, and boisterous new political forces were sweeping the growing nation.

Jackson and his allies spent four years building a popular movement in favor of majority rule. They worked to delegitimize President Adams, promoting the “corrupt bargain” conspiracy theory and blocking his programs in Congress. In their 1828 rematch, Jackson defeated Adams in a landslide. His 1829 inauguration was recorded as a triumph of the people, who mobbed the White House in such numbers that they trashed it. It’s this moment to which Giuliani referred on election night 2016.”

In using “Jacksonesque” methods without Jackson, the man, with his own experiences and moral center as a balance, Bannon and Trump, now Trump with Bolton and Giuliani, personify not just corruption. The world is seeing a darkness unleashed, an America wielded as a sword for globalist forces.

What is different today is that forces that reined in the “globalist cabal,” for lack of another term acceptable for publication, no longer exist.

The formula used to take America to war time and time again, 1898 with Spain or the two wars with Germany, jingoism, black propaganda, false flag terrorism, seen again on 9/11, has its limitations. When the US went to full scale war in Vietnam, justified by the Tonkin Gulf incident, reputedly a false flag attack on the US Navy by imaginary North Vietnamese patrol boats, the public eventually rose in relative “unison,” to stop the war.

Eventually, under the Clinton presidency, America had not only largely demilitarized, but had also entered into a series of treaties limiting strategic nuclear capabilities. The end result was a pay down on the national debt and an impeachment attempt against Clinton.

This was followed by the rigged election of 2000, then 9/11, then abrogated treaties, ten trillion in new debt, police state legislation, near total military rule and a permanent war footing.

The unions were gone and with them the political leaders who answered to the working class that fought the wars and paid the bills.

Campaign finance legislation was erased by a biased Supreme Court under Citizens United v. US in 2005.

Corporate control of media was complete.

Ragtag extremist billionaires, the Koch’s, Adelson, Scaife, DeVos, Coors and a series of offshore “oligarchs” bought congress, as had been done during the Jackson presidency nearly two centuries before.

The Trump administration on Monday rejected nearly all of China’s claims in the South China Sea – wading into one of the most sensitive...
Read more
Israel