[ Editor’s Note: Well it looks like Wayne LaPierre’s days of using the NRA as a piggy bank might be over. I must say it could not have happened to someone more deserving, but one of countless more that sit in high positions to serve themselves more and more.

The NRA members were the people who really got screwed in this deal, but I am not too sure how many of them care. This is what encourages CEOs of such organizations to loot the funding, because they can, and there is no one with a big enough bank account to take them on.

Although I was never a big fan of Ollie North, he did try to take on the board, but got nowhere. There had to be many people inside the operation that knew this was going on, but the mindset of people like these is they viewed their supporters of a good cause as chickens to be plucked.

While we look at other places around the world having rampant corruption, we are surely among the best, despite our being more sophisticated in our style. I will be waiting to see if the New York AG goes after the NRA auditors and accountants.

Gosh, silly me would be suspicious that they might have been in on the scam. That said, I hope the members get their money back so they can form a new org to represent them better than the bandits that they had…. Jim W. Dean ] 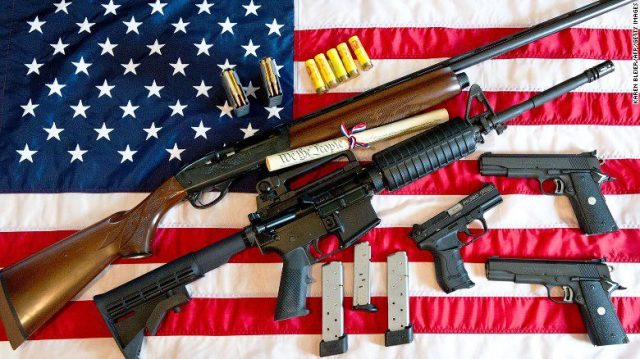 The chief executive of the National Rifle Association and several top lieutenants engaged in a decades-long pattern of fraud to raid the coffers of the powerful gun rights group for personal gain, according to a lawsuit filed Thursday by the New York attorney general, draining $64 million from the nonprofit in just three years.

In her lawsuit, Attorney General Letitia James called for the dissolution of the NRA and the removal of CEO Wayne LaPierre from the leadership post he has held for the past 39 years, saying he and others used the group’s funds to finance a luxury lifestyle.

She also asked a New York court to force LaPierre and three key deputies to repay NRA members for the ill-gotten funds and inflated salaries that her investigation found they took.

James accused the NRA leaders of flouting state and federal laws and signing off on reports and statements they knew were fraudulent, while diverting millions of dollars away from the NRA’s charitable mission to benefit themselves and their allies.

The attorney general requested that the court bar the four men — LaPierre, general counsel John Frazer, former treasurer Woody Phillips and former chief of staff Joshua Powell — from ever serving in a leadership position for a New York charity in the future.

“The NRA’s influence has been so powerful that the organization went unchecked for decades while top executives funneled millions into their own pockets,” James, a Democrat, said in a statement.

Her investigation, which began in February 2019, found a “a culture of self-dealing, mismanagement, and negligent oversight at the NRA that was illegal, oppressive, and fraudulent,” according to a statement by the attorney general’s office.

Meanwhile, D.C. Attorney General Karl A. Racine announced Thursday that his office filed a separate lawsuit against the NRA Foundation, which is based in Washington. Racine accused the organization of being a puppet of the NRA, despite legal requirements that it independently pursue charitable purposes. Instead, Racine said his office found, the foundation repeatedly loaned the NRA money to address its rising deficits.

James said at a news conference Thursday that she is seeking to dissolve the NRA because of the brazenness of the group’s violations of law.

“The corruption was so broad and because they have basically destroyed all the assets of the NRA,” she said. “Enough was enough … No one is above the law, not even the NRA.”

Her office cited as a precedent its previous action against the Trump Foundation, which led President Trump to shut down the charity in 2018 amid allegations that he used it for his personal benefit.

The New York lawsuit against the NRA paints a picture of widespread wrongdoing at the influential gun rights group, and a freewheeling atmosphere in which top officials repeatedly took advantage of their positions for their personal benefit.

In one new revelation, the attorney general said her investigation uncovered that LaPierre recently arranged a post-employment contract for himself with the NRA worth $17 million. He never sought board approval for the deal, the suit claims.

The lawsuit also claims LaPierre failed to report large sums of personal income to the IRS. James’s office said it found that the NRA chief funneled personal expenses through an outside public relations firm, allowing him to avoid reporting hundreds of thousands of dollars of personal income.

James said Thursday that she was referring those findings to the IRS. She also said that if her office uncovers criminal activity, it will be referred to the Manhattan District Attorney’s Office.

In response, the NRA said Thursday that it was filing its own lawsuit against James, alleging that the New York attorney general has violated the group’s free speech rights.

“This was a baseless, premeditated attack on our organization and the Second Amendment freedoms it fights to defend,” NRA President Carolyn Meadows said in a statement. “You could have set your watch by it: the investigation was going to reach its crescendo as we move into the 2020 election cycle.

“It’s a transparent attempt to score political points and attack the leading voice in opposition to the leftist agenda,” she added. “This has been a power grab by a political opportunist – a desperate move that is part of a rank political vendetta. Our members won’t be intimidated or bullied in their defense of political and constitutional freedom.”

Trump also decried the legal action against the organization, which spent millions on his behalf in 2016, calling it a “terrible thing” as he spoke to reporters Thursday morning at the White House. He said the NRA had been “decimated” by legal expenses and suggested the group should relocate from New York to Texas.

The scope of the allegations by the New York attorney general represents a serious challenge to the longtime political juggernaut , which has been riven in the past two years by infighting about use of the group’s funds.

Longtime NRA member Rob Pincus, a critic of LaPierre’s leadership, said Thursday in a statement that “none of us who have been pushing for NRA reform are celebrating today’s announcement.”

“It is tragic that the NY AG’s office is having to step in to clean up the NRA,” he added.

The group’s bitter internal battle burst into public view in April 2019 at the NRA’s annual convention in Indianapolis, when then-NRA President Oliver North was forced out by LaPierre after pressing for an internal financial review.

The Washington Post and other news organizations subsequently revealed how the NRA directed funds to board members and how LaPierre racked up hundreds of thousands of dollars in charges at a Beverly Hills clothing boutique and on foreign travel.

The Post also reported how, after a mass shooting at a high school in Parkland, Fla.,Pierre told close associates he was worried about how easily he could be targeted and needed a more secure place to live and sought to buy a $6 million, 10,000-square-foot French-style country estate in Westlake, Tex.

The suit expands on previous allegations that LaPierre improperly charged the NRA for private jet travel and luxury vacations that had no clear business purpose. The filing claims LaPierre billed the NRA more than $500,000 for private charter flights he and his family took to visit the Bahamas eight times over three years.

Last year, a spokesman for LaPierre told The Post his visits to the Bahamas were for NRA business. But the New York attorney general’s investigation found the trips were private vacations.

In four years, LaPierre was reimbursed by the NRA for $1.2 million in expenses that were personal trip, golf fees and gifts, the suit claims.

LaPierre also spent $3.6 million of NRA money for private travel consultants to arrange private jets and executive car service for his and his family’s use over just two years, the suit says. And he set aside several millions each year for private security for him and his family.

LaPierre also enjoyed the largesse of NRA vendors who hoped to keep their organization’s business, the suit said. One vendor gave LaPierre and his wife an all-expense paid trip to Africa for a safari adventure; another frequently loaned LaPierre and his family the use of his 107-foot yacht on his visits to the Caribbean.

Phillips, the former treasurer, is accused in the suit of arranging a NRA deal worth more than $1 million that benefited his girlfriend. The lawsuit also claims that shortly before he retired in 2018, Phillips obtained a contract for himself worth $1.8 million. On paper, Phillips’s contract called for him to provide advice and consulting services for the new treasurer; but the new treasurer said he knew nothing of the contract and never received any services from Phillips, the suit claims.

Powell, LaPierre’s former chief of staff, had his salary increased from $250,000 to $800,000 in just three years as a reward for his loyalty to LaPierre, the suit states, and allegedly pocketed an additional $100,000 he was not entitled to as a housing allowance. In addition, Powell also arranged for his wife and father to earn money through NRA contracts.

The lawsuit accuses Frazer, who was general counsel to the NRA, of failing to make sure the nonprofit was governed properly and followed state and federal laws, and it claims he certified false or misleading…

Proposed: Declaration of War Against the RKM – Veterans Today

by  Preston James and Mike Harris (2015)Before America can embark on a national mission to eradicate the influence of the Rothschild Khazarian Mafia (RKM)...
Read more
COVID-19

The United Kingdom has reported a record number of coronavirus cases over the past day, topping its previous record from only the day before,...
Read more

A trio of hockey...
Read more

Proposed: Declaration of War Against the RKM – Veterans Today

by  Preston James and Mike Harris (2015)Before America can embark on a national mission to eradicate the influence of the Rothschild Khazarian Mafia (RKM)...
Read more