Return of the Titans by Jack Heart – Veterans Today

“The blood of the Titans is alive, I thought, strangely and wonderfully alive!”

“We are not allowed to forget Hitler and wartime Germany. Nightly, we are presented with an ever-ongoing television tirade against the man and the country he loved. It all happened so long ago that one may well wonder why it doesn’t cease. There can be only one answer: FEAR, the fear that a fourth Reich will come from beneath the ice of Neu-Sachwabenland–to square accounts may be well-founded . . . There are many who believe Hitler did not die a suicide; there are many who believe he escaped to a warm place made ready for him beneath the ice of the Antarctic.” – Norma Cox

Dorothy Norma Cox wrote her magnum opus Kingdoms Within Earth in 1985. She is the author of several other books and distributed and published the newsletter Secrets till 1996. (1) Seer, visionary, prophetess, and madwoman she may very well have been the only Christian that ever really did frighten the Zionists whom she accused of using their stranglehold on the media to cover up the truth about the hollow earth.

During her lifelong relentless campaign against the Jews, whom she labeled as the progeny of Satan, she corresponded and even once met with a man named Richard Shaver, the progenitor of the Shaver Mystery. In the years directly proceeding WWII, the Shaver Mystery spawned what can only be described as an international furor among the readers of science fiction.

In 1943 Ray Palmer a reclusive dwarf crippled by a broken back since childhood and editor of the wildly popular Amazing Stories Magazine received a letter from a man even stranger than himself. Shaver, the author of the letter, claimed to have rediscovered an ancient forgotten language called ‘Mantong,’ the primal source of all other languages. The phonetics of the language had a meaning of their own and when applied to the words of any other language could decipher their secret meanings.

Shaver by his own admission had been in communication with the welding torch at his job. But, strangely enough, Palmer and his staff applied Mantong to “the letter-meaning to the individual letter of many old root words and proper names and got an amazing sense out of them.” After publishing Shaver’s letter, salvaged from his wastepaper basket, Palmer asked his readers to experiment with Mantong. The overwhelming response by hundreds who wrote back to Palmer was that it worked.

Shaver followed up his Mantong letter with a ten-thousand-word manuscript titled “A Warning to Future Man.” By the time Palmer was through editing it, which he did through a two-year correspondence with Shaver much of it appearing in the work as the index at the end of each chapter, Shaver’s piece had grown to a thirty-one-thousand-word novella. It was published in the March 1945 issue of Amazing Stories Magazine under the title “I Remember Lemuria!” (2)

The story told was of a human race that has existed from time out of mind, moving from sun to sun as each sun became toxic with age. Every sun started out as a planet itself just as the earth’s had; shrouded in cloud cover to promote maximum fecundity of life as it orbited its own sun. Layer upon layer of life living and dying encased the planet in carbon thousands of miles thick to its heavy metalcore. When its sun went black and died out the planet became a lifeless sphere of shimmering ice until ignited from deep within by a collision with a mass broken off from another sun and the cycle began anew.

Carbon itself burns clean and due to his godlike sciences man was practically immortal as his civilizations basked in its beneficent glow, colonizing other stars unknown. But as the sun burns down it begins to consume its heavy metal core which gives off radioactive toxins that produce aging, loss of mental faculties, and finally death. So, man must constantly migrate from old sun to new sun.

To avoid this many chose to build their civilizations underground, some even in the outer perimeters of space where there is eternal darkness. This race was called the Nor or Norman marked by their brilliant blond hair and snow-white skin never touched by sunlight. Earth, then called Mu, was inhabited by the Atlans and their magnificent horned allies called the Titans. *

Elders, who were the sum and total of the eons of each civilization’s wisdom, ruled over them. The Atlans out of the sheer joy for what was a different and sensual attraction to what was exotic had hybridized with all the myriads of life forms encountered throughout their millenniums of space exploration and colonization. The Nor, dedicated to their Goddess Venus and enamored of their own beauty of form, wore as few garments as possible to display their physical assets and refused to hybridize. 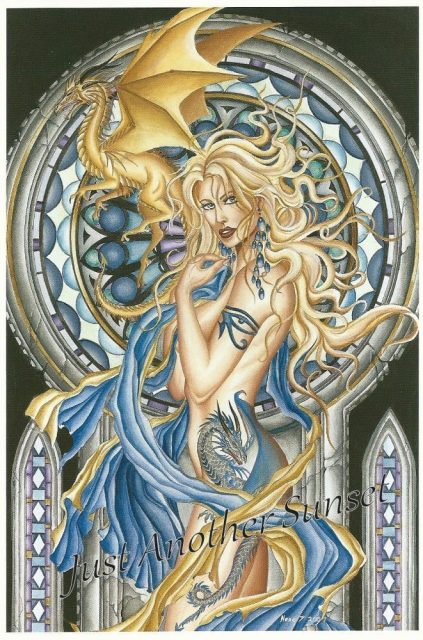 Both civilizations reveled in their own erotic desires and satiating them was their raison d’être. Every entity in its own vigorous health viewed other entities as a part of themselves. To interfere, repress or murder another entity was an act of self-immolation. The primary city of the Atlans was deep within the bowels of the earth, close to its core, where the Titans, unimpeded by their great size, could move about freely unrestrained by gravity. On its avenues passed an unending amorous procession of strangely seductive hybrids, some with the lower bodies of serpents, some with cloven hoofs, all mingled together with fantastically beautiful people.

But sex was for pleasure heightened by all manner of machines. Procreation was performed in laboratories; embryos grown in sealed receptacles suspended in a substance called Icor honed by the sciences of tens of thousands of years. As the embryo grew into life the “blood of the Gods,” Icor, was fed to them through artificial umbilical cords.

Death was almost unheard of and growth indeterminate. Elders treated themselves with special hormonal regimes that allowed them to enslave their willing opposite gender with chains forged of sexual ecstasy. The Elders sometimes attained heights of three hundred feet. But no one aged after reaching maturity.

The Atlans and Titans were the masters of all that was good in existence. They were lords of creation but in their own mastery, they forgot that where there is creation there must also be destruction. Evil is just as strong as good and always, always, one will balance the other. Throughout the numberless eons, the Atlans had honeycombed the earth with tunnels and caverns, some long-abandoned along with the technology they harbored. The technology was from a time when the earth’s sun was new. Its creators unimpeded by toxins from the sun flourished and became gods migrating to unknown parts of the universe leaving behind the machinery.

In every civilization no matter how paradisiacal there will always be outcasts, those that do not fit in, and Mu was no exception. There were some who fled to the cultivation forests living generationally like animals. In time some of these savages found their way into the forgotten catacombs of Mu’s ancient civilizations. Eventually, these savages discovered the tunnels and caverns and learned to use the abandoned technology to satisfy their requirements for pleasure.

Somewhere in time, the Atlans had found it necessary to exile one of their own, one of the Elders, more god than man. He had found his way into the caverns of the Deros and organized them, teaching them to master the machinery they had prior only played with. And from the darkness of their hidden citadels, they gained control of Mu by way of selective assassination and taking control of the information dissemination outlets.

Many among the Atlans were aware of their presence but to speak out against them was to sign one’s own death warrant. With their machinery, they were able to monitor all of Mu and read the thoughts of its inhabitants. Consequently, the Atlans stayed on Mu long past the time when they should have fled the deleterious effects of its dying sun. But a handful of students, among them the narrator of the story, do manage to escape and flee to the outer darkness of the Nor.

The Nors, upon learning of the Dero, motivated not only by altruism but also the knowledge that the evil must be contained, send a great fleet of starships to make war on the Dero and free the Atlans and Titans under their control. When the Nor arrive the Dero threaten to use their machines to kill all the unsuspecting inhabitants of Mu if the Nor do not turn back. 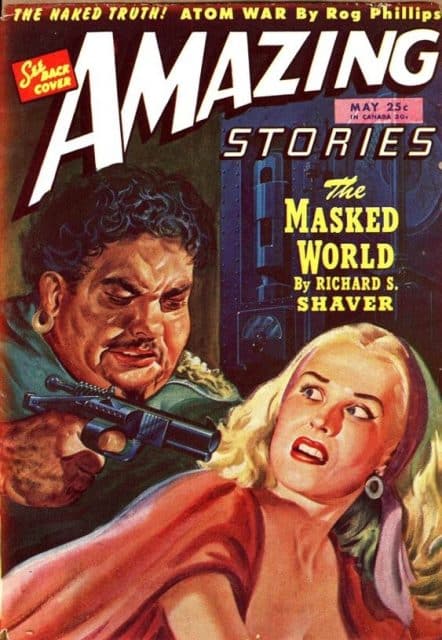 They don’t and they manage to bypass the Deros on guard by tricking them with a sleep ray and enter the underworld undetected. When they reach the citadel of the Dero close to the earth’s core an epic battle ensues. The Dero have better weapons from the superior ancient technology and are led by the brilliant but twisted Elder god. Nor, with untold millenniums of bliss to live for, are killed by the thousands but they just keep coming . They finally breach the walls of the hypogean city and lay waste to it slaughtering the Dero and capturing the Elder god to learn what they can of the technology.

The surviving Atlans and Titans evacuate to far off stars unknown and the Nor return triumphantly to their dark abode. But as they are leaving Mu the narrator knows the Dero has been defeated but not exterminated and there are still men, the savages of the forests, on the surface of Mu. Even though they will live but short and brutal lives under Mu’s aging sun the narrator knows too that through the veins of these savages flow the…