Status of Democrat’s Sham Articles of Impeachment Push, Summed Up By 3 Cartoons

A Los Angeles Unified School District board member spoke out against the district's plan to remove police officers from...
Read more

By now most readers know that Democrats have announced two stupid and ridiculous Articles of Impeachment against President Trump, one for abuse of power and the second for obstruction of Congress.

Both charges are trumped up nonsense, but where does Democrat’s impeachment push stand now?

Here in three cartoons is our answer:

They’re about to jump off of a cliff, with no parachute.

The Democrats always seem to stand united. Sadly the Republicans do not. Trump wants a full trial, McConnell is indicating something different, as Reuters reports:

“U.S. Senate Majority Leader Mitch McConnell raised the prospect on Tuesday of a short Senate impeachment trial for President Donald Trump in which no witnesses would be called.

The scenario of a truncated trial would put McConnell, the top Senate Republican, at odds with Trump, also a Republican, who has been calling for a full trial with witnesses, including former Vice President Joe Biden, on the Senate floor.

The Democratic-controlled House of Representatives is expected to vote to impeach Trump next week after unveiling formal charges against him on Tuesday.

The charges accuse Trump of “betraying” the country by abusing power in an effort to pressure Ukraine to probe Biden, a 2020 Democratic presidential contender, and then obstructing Congress’ investigation into the scandal.

Trump has denied any wrongdoing and has made the Democratic-led impeachment inquiry a rallying cry for his supporters as he attempts to win re-election next November.

McConnell stressed in remarks to reporters that no decisions had been made on how a trial would proceed if the House approves articles of impeachment against Trump.

McConnell said any trial would begin with House Democrats making their case for finding Trump guilty on the two articles followed by White House lawyers arguing for an acquittal.

At that point, McConnell said, the Senate “could go down the path of calling witnesses and basically having another trial.”

Or, he said, 51 senators could come together, which would be a majority of the 100 senators, and decide “that they’ve heard enough and they believe they know what would happen and could move to vote on the two articles of impeachment sent over to us by the House.”

Sen. Mitch McConnell: “I would be totally surprised if there were 67 senators to remove the President.” pic.twitter.com/ujLvXNZVFy

While Trump has repeatedly called the House Democrats’ impeachment investigation a “witch hunt,” he also has called for a trial with witnesses testifying.

In a tweet on Dec. 5, he wrote: “We will have Schiff, the Bidens, Pelosi and many more testify.” He was referring to House Intelligence Committee Chairman Adam Schiff, Biden, his son Hunter and House Speaker Nancy Pelosi, all Democrats.

White House legislative liaison Eric Ueland told reporters after that meeting that in order for Trump to make an effective case to the Senate, “We need both a full trial and the opportunity to call witnesses,” pointing to the Senate chamber.”

The political impeachment game continues. The Dems have a solid, albeit miguided, game plan but the Republicans, as usual, do not. How this will all play out in a election year remains to be seen. The Republicans had better get their act together or things may not turn out so well for sitting Senators. 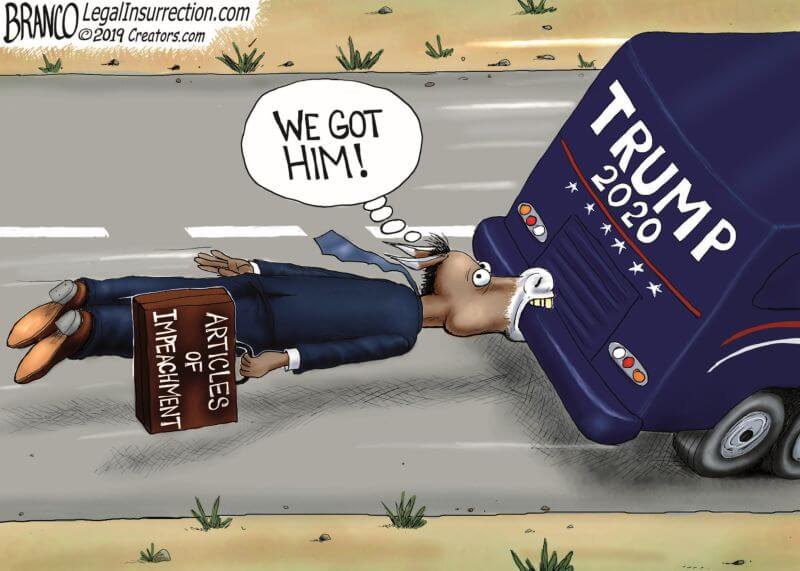 A Los Angeles Unified School District board member spoke out against the district's plan to remove police officers from...
Read more
Military

Hillary Goads Trump Over SCOTUS Pick, Says Democrats Must Use Every ‘Obstacle’ They Can To Block Him

Former Secretary of State Hillary Clinton spent a portion of her Friday evening explaining tactics she feels Democrats should use to retain the seat...
Read more
COVID-19

Canadian health officials have announced a new coronavirus test that consists of gargling and spitting, according to reports. In the much less-invasive test, the...
Read more

A Los Angeles Unified School District board member spoke out against the district's plan to remove police officers from schools at a meeting this...
Read more

Hillary Goads Trump Over SCOTUS Pick, Says Democrats Must Use Every ‘Obstacle’ They Can To Block Him

Former Secretary of State Hillary Clinton spent a portion of her Friday evening explaining tactics she feels Democrats should use to retain the seat...
Read more
patriots news