NEWYou can now listen to Fox News articles! Federal prosecutors in New Mexico are now alleging that the...
Read more

NEWYou can now listen to Fox News articles! Dozens of countries, including the United States, Japan, the United...
Read more

NEWYou can now listen to Fox News articles! China will renew its military drills around Taiwan after a...
Read more

Eli Erlick, a founder of Trans Student Educational Resources (TSER) and creator of a popular “Gender Unicorn” graphic for “gender fluidity,” tweeted and later deleted the remark on Friday, when the High Court delivered its ruling in Dobbs v. Jackson Women’s Health Organization. Since 2011, Erlick and the “youth-led” organization have helped implement transgender policies in dozens of school districts, including Wisconsin, New York, and Texas. The group backs sweeping “structural change” as opposed to “equality,” which according to its website, “reinforces systems of white supremacy, transphobia, and injustice.”

Following the leaked Dobbs decision in May, pro-abortion activists have targeted pro-life offices and crisis pregnancy centers across the country. Vandals firebombed pro-life buildings in Wisconsin and New York and defaced four pro-life churches in Washington State. Fears heightened in June when an armed California man was arrested outside the home of Brett Kavanaugh and later confessed to plans to assassinate the justice.

Assassination threats, sometimes from accounts with thousands of followers, erupted on social media on the day the Court ended constitutional protection for abortion.

“Can someone kill Clarence Thomas??” an account with more than 14,000 followers tweeted. The post hadn’t been taken down as of this article’s publication.

Another user said, “i’m going to assassinate supreme court justice Clarence Thomas,” in a tweet that has since been taken down. The account is no longer visible. 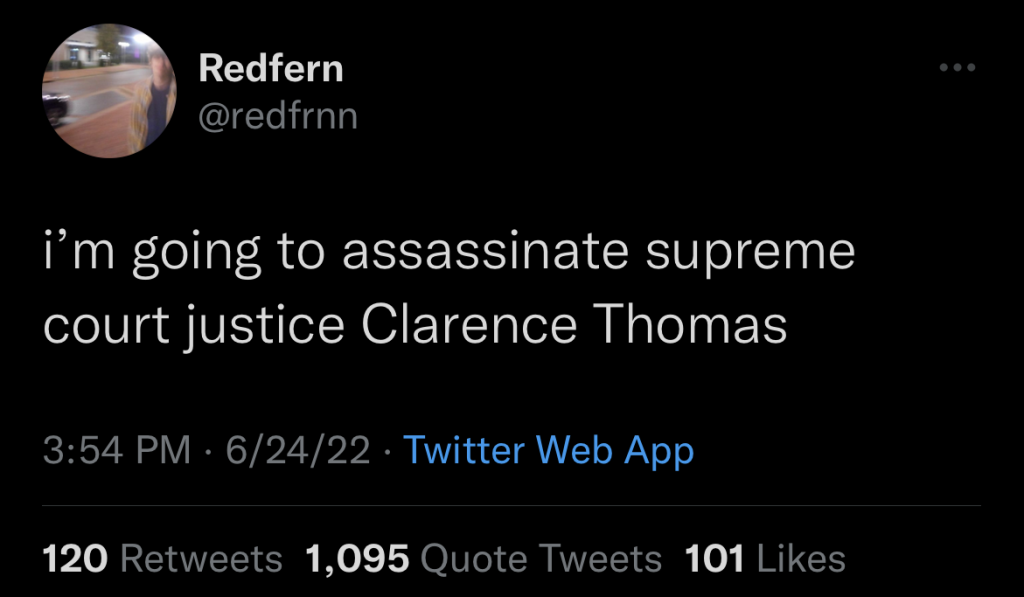 After deleting the assassination post, Erlick, who has more than 10,000 followers on Twitter, called out conservative pundit Ann Coulter for having joked six years ago that someone should “rat poison” former associate justice John Paul Stevens.

“The right only wants to defend the Supreme Court when it leans conservative,” Erlick tweeted.

Erlick was named one of Glamour magazine’s 2017 Women of the Year and has received breathless media coverage since transitioning and becoming a political activist as a teen.

Violence has only worsened since the Dobbs ruling. Protesters in Los Angeles assaulted police with fireworks and a makeshift blow torch, injuring four officers. In Phoenix, others attempted to storm the state capitol building while its Senate was in session, smashing windows and tearing down a fence in the process.

“Critical thinking requires carefully considering the source,” Max Eden, a research fellow at the American Enterprise Institute, told the Free Beacon. “The ‘Gender Unicorn’ graphic makes profound claims about the fundamental metaphysical nature of mankind. The source doesn’t particularly appear to be a balanced and disinterested sage, to say the least.”

Update 4:13 p.m.: This piece has been updated with an additional comment.